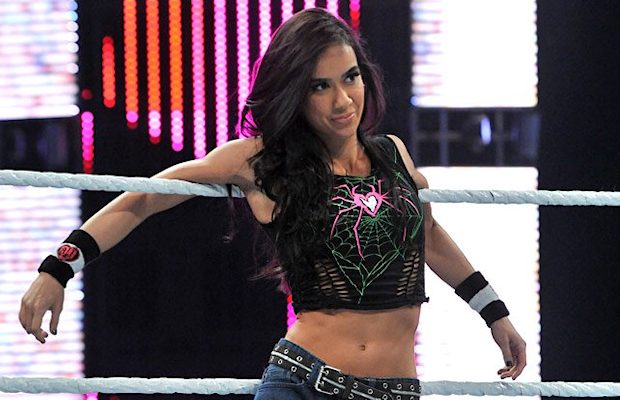 In June 2013, AJ Mendez (aka AJ Lee) defeated Kaitlyn to capture the Divas Championship and would go on to hold that title for a record-shattering 295 days until she was unseated by Paige the day after WrestleMania 30. It would be her first of three Divas Championships.

Although Mendez achieved great success in WWE, she did so in an era before women were consistently main eventing shows. During an interview with Kristine Leahy for the FS1 show Fair Game, the former WWE Superstar talked about what wrestling in the current era would have meant for her.

“I feel like it wouldn’t have been as good for me, probably. I think everything happens when it’s supposed to, and I think I really benefited from just having really good timing,” Mendez said.

“In my time in the business, there was so much pressure on the girls to conform to a mold and a formula that worked. Not only was it pressure, you would sort of be punished if you didn’t.

“There was a time when they would check to make sure our manicures were perfect. If our hair wasn’t long enough, they’d tell us we had to get extensions, and your weight would be commented on. That made for a lot of pressure where girls didn’t feel like they could just show who their genuine self was. That’s understandable, but I’ve always been willing to fail if the only option is it’s either doing it my way and what’s true and genuine to me, or failure. I will choose just to do it my way. I never want to compromise.”

Mendez would go as far as to say that WWE’s female talent in the early 2010s were criticized by higher-ups for their weight, hair, clothes, appearance, makeup and sex appeal. She was told by a high-ranking official, “No one wants to have sex with you.”

“Being the person that was kind of riding the fine line of getting in trouble a lot, I was willing to do that and that’s what helped me. I was rare at the time,” Mendez said.

“You didn’t see a girl who was like not wearing her makeup, or not doing her hair, or was wearing clothes that you could find at Target on TV. I got in trouble for that at first. I was told that no one would want to have sex with me. Yes, it’s a title of a chapter in my book — “No one wants to have sex with you.”

“I cried. I cried for so long, and then my hair was immediately dyed lighter. Yeah, it was very demoralizing, but I kind of took it like, ‘Okay. I tried to conform for a minute, but no this isn’t me.’

Fortunately for Mendez, the positive reaction from fans ended up being her saving grace.

“What really saved me was the fans, and the fans responded to just me being me,” Mendez said.

“After a while, it was like you can’t argue with these people who are supporting me for being me. Then, they really did get on board and were like, ‘Okay. You’re you, you’re loud and abrasive and you’re like kind of asexual. That’s your own thing, and that’s working and it’s making us money.’ It made money, and money talks.“

Mendez’ introduction to WWE fans came in the fall of 2010 on NXT, back when the show was a competition that would see a set number of developmental wrestlers compete for a main roster contract. Mendez was part of season three, which was comprised entirely of female contestants.

Mendez’ performances on the show drew praise, but it wasn’t enough for the WWE official. As she detailed in her book — Crazy Is My Superpower: How I Triumphed by Breaking Bones, Breaking Hearts, and Breaking the Rules — that person told her during a meeting, “Nobody wants to have sex with you.”

This was considered an indictment of her marketability and she was soon eliminated from NXT despite being told that she was getting the highest number of fan votes each week. Mendez does not name the person in her book, but said the person was the head of talent relations. The person is John Laurinaitis since he was the head of talent relations at the time.