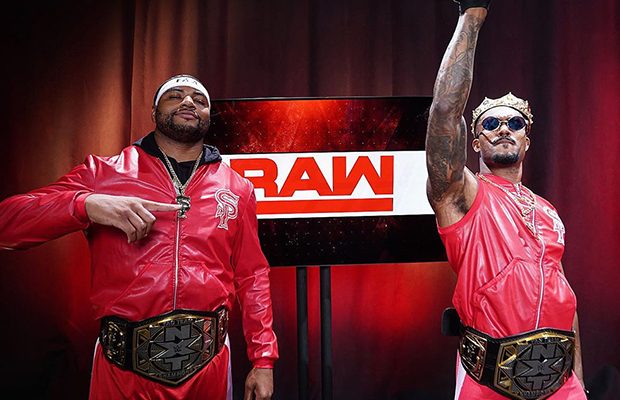 To the surprise of the WWE Universe, this week’s episode of Raw saw NXT Tag Team Champions The Street Profits make their main roster debut.

Angelo Dawkins and Montez Ford’s first appearance came during an awkward backstage cut in the opening minutes of the show that appeared to be a mistake by WWE’s television production team. They were interviewed a short while later by Charly Caruso, with the duo cutting a backstage promo claiming they were there to “bring the swag to the show” and that they “want some smoke.”

The Street Profits returned in the third hour, interrupting Caruso’s interview with Heyman. Heyman was none too moved by The Street Profits messing with his outfit and rubbing his head, and he opted to leave. Dawkins and Ford concluded they’d “overstayed their welcome.”

After being named Executive Director of Raw last week, Heyman had “his fingerprints” on the show as a number of his ideas were used. According to Dave Meltzer on Wrestling Observer Radio, it was Heyman’s idea for The Street Profits to appear on Raw. They’re not officially on the main roster, but will continue to appear on Raw.

“They are still technically NXT wrestlers. It was not a call-up but they are gonna be on Raw TV,” Meltzer said. “That was a Heyman move to have new faces on the show. When someone starts, you always want new faces, you always want young talent. You always want to create new wild stories.”

WWE.com has Dawkins and Ford listed as part of the NXT roster, but not Raw. Meltzer also noted in the Wrestling Observer Newsletter that they will continue to appear at NXT live events.

Meltzer also noted that “a lot of politics” were involved in The Street Profits’ appearance on Raw. Meltzer did not explain what he meant by that, but the implication is that Triple H isn’t happy with Dawkins and Ford appearing on Raw while holding the NXT Tag Team Championship.