Alexa Bliss On If She Cares What Fans Think Of Her, Who Influenced Her Wrestling Outfits - PWPIX.net

Home / Features / Alexa Bliss On If She Cares What Fans Think Of Her, Who Influenced Her Wrestling Outfits

Alexa Bliss On If She Cares What Fans Think Of Her, Who Influenced Her Wrestling Outfits 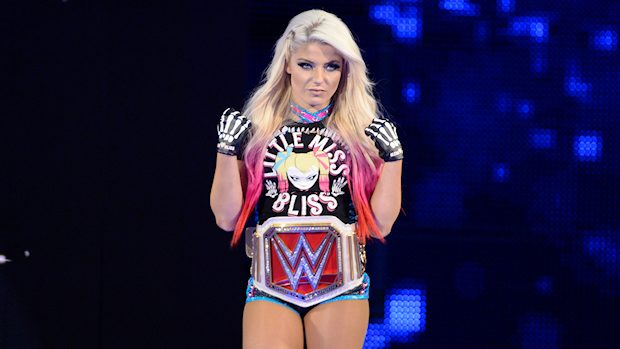 Raw Women’s Champion Alexa Bliss spoke with Weekender to promote this Monday’s Raw in Wilkes-Barre, Pennsylvania at the Mohegan Sun Arena at Casey Plaza. Here are some highlights from the interview:

Being a heel and the reaction from fans:

“It’s so much easier to get people to hate you than to like you, and I kind of like to play with that a little bit. Not caring what the fans think and just kind of wanting them to hate me, even though I do kind of care what they think; it’s just so fun to portray this mean person, just to see how people react to it. It’s a lot of fun.”

The former WWE Champion who influenced her colorful costumes:

“Rey Mysterio used to have different outfits as well, and I used to watch Rey growing up; and I thought he was awesome because he had lucha style, which I liked because I was a gymnast. The fact he used to dress up as all kinds of different characters is where I got the idea to do that myself.”

Her experience in NXT:

“I didn’t get a lot of time in NXT to really develop in the ring or anything like that; I never had a ‘Takeover’ match; I never had a title. I always said I could not wait to get into a program with Bayley because she gave me some of the best matches I ever had in NXT.”