Speculation On Who Texted Corey Graves About Kurt Angle - PWPIX.net

Speculation On Who Texted Corey Graves About Kurt Angle 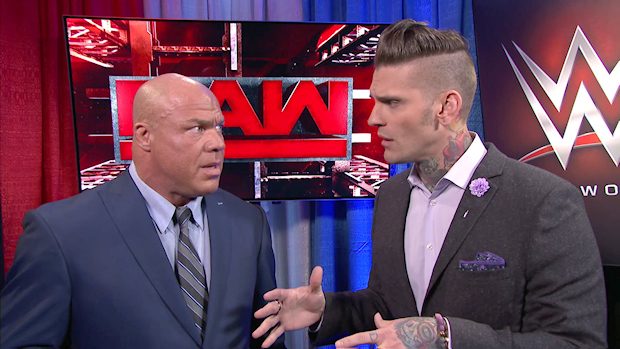 This past Monday, there was a mysterious backstage segment in which Corey Graves revealed some damaging information to Raw General Manager Kurt Angle. So what exactly was going on here? What did Graves tell Angle?

In the segment, Angle read a text on his phone saying that he is a horrible General Manager and an embarrassment to WWE. Graves says that he loves what Angle is doing as General Manager but that he wanted to give him a heads up about this.

“If this is true, it could ruin me,” Angle replied.

That’s all we really know at this time, but most fans think this has something to do with Stephanie McMahon. She could return any week now, and she has been known to feud with the General Manager of Raw, as she did recently with Mick Foley.

Following Raw, Dave Meltzer and Bryan Alvarez discussed the angle on Wrestling Observer Radio and both are under the impression that it will lead to Stephanie returning to ‘ruin’ Angle.

Stephanie and Angle have plenty of history from the Raw General Manager’s previous run in WWE and they could reignite their animosity with this new storyline.

The obvious implication is that Stephanie is getting ready to fire or reprimand Angle. WWE posted a video of the segment on Twitter and they set it up by saying that Corey Graves “seems to have found some scandalous information about” Angle. This suggests that Stephanie is responding to a specific revelation about him.

Stephanie has been absent from WWE programming since WrestleMania 33 when she crashed onto a table during Seth Rollins’ match against Triple H. Within the storyline, she has been absent because she was injured during this match, although in reality, she went on vacation with her family after WrestleMania. She has since returned to work, and WWE has been waiting to bring her until there a storyline was in place. Now, it appears they have found their angle.

Related ItemsCorey Graves NewsKurt Angle NewsStephanie McMahon News
← Previous Story Alexa Bliss On If She Cares What Fans Think Of Her, Who Influenced Her Wrestling Outfits
Next Story → New Photo Of Vince McMahon Looking Ripped At The Gym, Watch The Updated Opening For WWE NXT