Home / Wrestling News / WWE News / Did Ali Know Brock Lesnar Would Knock Him Off A Ladder At WWE Money in the Bank?

Did Ali Know Brock Lesnar Would Knock Him Off A Ladder At WWE Money in the Bank? 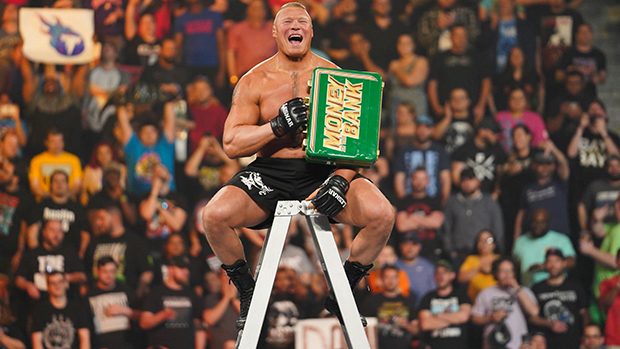 Ali was the only participant in the Men’s Money in the Bank Ladder Match who was told that Brock Lesnar would be winning the contest, according to Dave Meltzer in the Wrestling Observer Newsletter.

Lesnar was hidden away from most everyone in the backstage area, according to PWInsider. There were rumors earlier in the day of Lesnar appearing, but no one could confirm he was there. Only a small group of people were aware of Lesnar’s involvement in the match beforehand.

According to Meltzer, the other seven participants in the Men’s Money in the Bank Ladder Match were told that that an unannounced wrestler would appear and knock Ali off the ladder to score the win. Ali was then told right before the match started that Lesnar would be the wrestler to insert himself into the match and win the briefcase, but told to keep it quiet.

According to WWE.com, Lesnar is expected to announce on Raw this Monday which World Champion he will cash in his contract on. He will likely cash in his contract for a shot at Seth Rollins’ Universal Championship at WWE Super ShowDown on Friday, June 7. WWE reportedly had plans dating back to before WrestleMania 35 for Lesnar to receive his rematch against Rollins at the show.