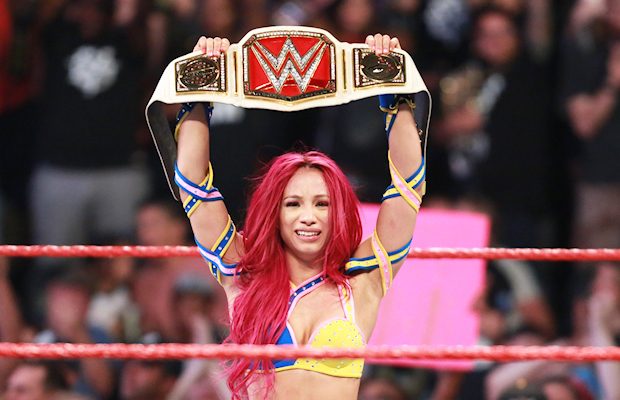 How much does WWE pay Muscle and Fitness to put there own on the cover. Common Sasha Banks another attempt to shove someone down people’s throats. Let them get over themselves how bout that.
Get real.

– WWE’s website spoke to Lana about her wedding with Rusev over the weekend. The full interview is at this link and below are some of the highlights:

WWE.COM: How would you describe the feel and vibe of the ceremony?

LANA: I didn’t want something too traditional. Most people just have a bunch of perfect roses. I wanted an eclectic, unique [ceremony] with bright flowers, wild sunflowers in there and wonderful, beautiful roses, because I feel like my life is this big, unique, eclectic thing. I’m not a traditional person and it’s hard to describe me in one word, so that’s what I wanted my wedding to reflect — just this huge melting pot.

WWE.COM: Did any Superstars play wedding planner and have a hand in helping you put ideas together for the ceremony?

LANA: Yes, Nattie actually helped me with a lot of different ideas. This might come as a surprise, but NattIe is very traditional [laughs] and while helping me plan the wedding she wanted all these traditional things and I’m like, “No!” She would say, “This is what people do, this is how people plan their weddings,” and I’d say, “I don’t care what people do, I don’t wanna do everything that already has been done.” So, we would hit heads quite a bit during those discussions and I’m sure people will see that on E!’s “Total Divas.”

WWE.COM: Were the “Total Divas” cameras there to capture all of this?

LANA: Yes, and I’m actually really excited to have it be on “Total Divas” and have people see how entertaining and how fun our wedding was, but also how inspiring it was.

WWE.COM: What’s next for you two?

LANA: Well, we are actually having a second wedding in Bulgaria on Sept. 2. That is going to be very Bulgarian, very traditional, but just spectacular because I am the most ravishing bride of all-time!

– Above is a preview for “Scooby-Doo and WWE: Curse of the Speed Demon” with The Undertaker and others.