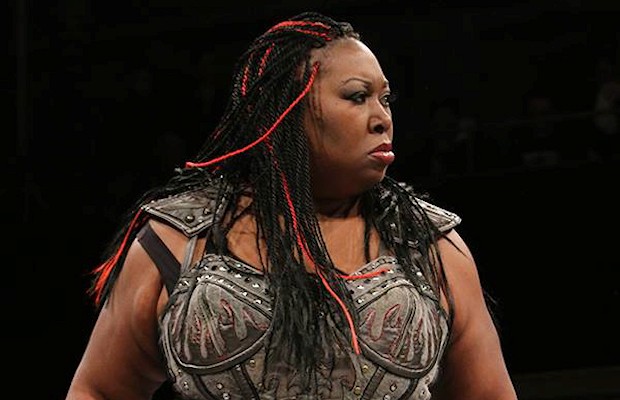 The incident likely stems from some derogatory remarks the two made about each other in 2013.

During an uncensored interview with the YouShoot DVD series, Kong referred to Sky as a ‘ho’ for her outspoken nature. When asked on ASKfm (a social networking site where users create profiles and can send each other questions) about Kong knocking her, Sky responded, “Not aware of this, if it is true. Doesn’t make much sense, as I don’t know her on a really personal level & we have been nothing but nice to each other in passing at shows. We’ve actually texted back & forth a few times, so if she now has a problem with me, I can only attribute it to one thing/person. Fake as fuck to be nice to my face & talk shit to a camera if its true, but no shocker there. That’s 99% of the women in this business anyway. Next.”

Sky later implied Kong as a drug addict, stating on ASKfm, “Broke wrestlers doing “shoot” interviews for a couple hundred bucks to support their drug habits can KEEP mentioning me. Everyone knows I’m in an AMAZING committed relationship & love a good name drop :).”

After a fan asked Sky on the site if she was referring to Kong in her statement, she remarked, “And for the record, yes, that’s exactly what I’m saying, and for damn good reason. No use in continuing to play nice or protect anyone who is sweet to my face & a cunt to me & my close friends behind my back.”

According to Johnson, Sky left the locker room after Kong threw her belongings outside. When she returned near the room to retrieve her things, Kong went after her for “not apologizing.” Johnson believes Sky’s past remarks are what led to Kong’s outburst and demand for an apology.

There are two stories on the incident circulating among TNA workers. One story is that Kong attempted to assault Sky, but was quickly restrained from doing so. The second story, which Johnson heard from ‘far’ more people, is that Kong throttled Sky around the neck before being restrained by security guards and producer Pat Kenney.

Johnson added that Sky’s infant son was in the vicinity of the ordeal.

Kong parted ways with TNA in 2010 after assaulting Bubba the Love Sponge backstage at a television event for remarks he made on Twitter that were disparaging of Haiti’s struggle to recover from a recent earthquake (he was appearing as a backstage interviewer for the company at the time through his connection to then-talent Hulk Hogan).