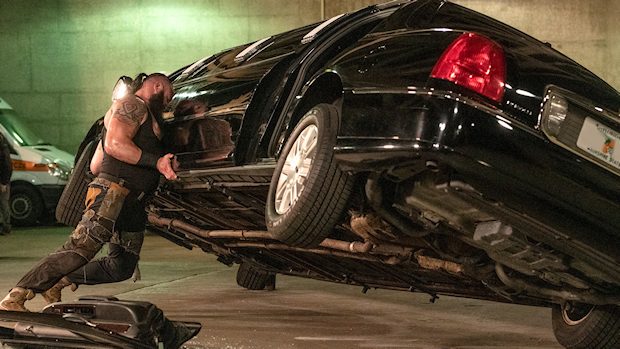 Braun Strowman is out of the Universal Championship M at the Royal Rumble.

night’s episode of Raw featured an angle where Baron Corbin interrupted Strowman at the start of the show. It led to Strowman chasing Corbin, with Corbin running away. Corbin hid in Vince McMahon’s limo, Elias told Strowman where Corbin was, and Strowman destroyed one of the limo’s windows and doors.

McMahon said he was fining Strowman $100,000. told McMahon the limousine wasn’t even worth that much, and Vince punished Strowman by removing him from the Universal Championship Match against Brock Lesnar at the Royal Rumble. then tipped over the limousine.

Heading into WWE Crown Jewel on November 2, McMahon planned on Lesnar and Strowman having a rematch at the Royal Rumble after Lesnar defeated Strowman in a five-minute squash match where Strowman took a belt shot from Baron Corbin before the match started. Following the event, McMahon felt that Strowman’s character was cooling off and he didn’t want to beat him again. also got injured, which affected the build to his rematch with Lesnar.

McMahon planned on having Lesnar beat Strowman again. Instead of going with that finish, McMahon decided to change the match and have Lesnar face someone else.

McMahon didn’t feel he had a lot of choices for a suitable opponent for Lesnar, so he ultimately went with Balor. Balor was actually scheduled to face Lesnar at last year’s Royal Rumble, but the match was nixed due to McMahon feeling that Balor wasn’t over enough. Meltzer noted that Lesnar wants to work with Balor, and wanted to do the match with him at last year’s event.

WWE continued to advertise Lesnar vs. Strowman to move tickets because the Royal Rumble is taking place at a baseball stadium — Chase Field in Phoenix, Arizona. WWE did something similar a few months ago for Evolution by advertising Alexa Bliss vs. Trish Stratus when they had no intention of the match taking place. The match ended up being changed to Stratus and Lita vs. Mickie James and Alicia Fox, although Bliss was scheduled to be in Fox’s spot. Just three days before the October 28 event, WWE withdrew her from wrestling due to injury. She has not wrestled since.

As for , he has not been cleared return to action and it’s not known if he will be cleared by the Royal Rumble.