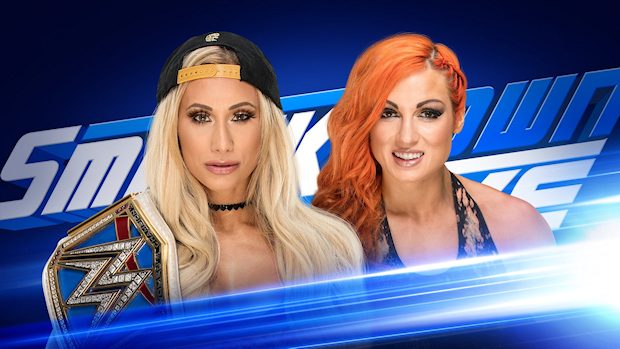 – After Becky Lynch turned in another impressive victory this week on SmackDown LIVE against Mandy Rose, “The Irish Lass Kicker” made an impassioned post-show warning that she is coming after the SmackDown Women’s Championship.

SmackDown LIVE General Manager Paige was definitely listening, as she declared that Lynch will square off against “The Princess of Staten Island” next week.

According to WWE.com, Paige will throw the titleholder “the Mellabration of all Mellabrations.” But if Becky emerges victorious, she will earn a SmackDown Women’s Title opportunity at SummerSlam.

Behind-the-scenes, WWE currently has plans for Lynch to challenge Carmella for the SmackDown Women’s Championship at SummerSlam on August 19.

Following her win over Rose, Lynch predicted in a backstage interview with Dasha Fuentes that unlike last year, she will be in the SmackDown Women’s Title Match against Carmella at Summerslam.

– Among those vying for the Mae Young Classic trophy is NXT rookie Jessica Elaban. On Wednesday, WWE confirmed Elaban and three other names for the 32-woman tournament. She reacted to the big news in this post on Instagram.

Know what you want and go for it! I’m soooo wowzers ecstatic to be part of this year’s @maeyoungclassic I could cartwheel EVERYWHERE. 😆🤓🤸🏻‍♀️

– American Gentlemen’s “Everybody’s Talking Bout Us” is the theme for the latest WWE Shop commercial.