Backstage Notes On Brock Lesnar’s New WWE Deal, When His Next UFC Fight Could Take Place 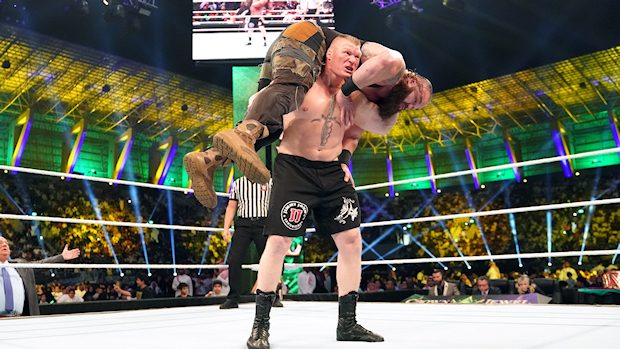 Lesnar’s latest short-term contract was to expire at Crown Jewel. According to Dave Meltzer in the Wrestling Observer Newsletter, WWE officials planned on having Reigns win the originally scheduled Triple Threat Match with Lesnar and Strowman, presumably pinning Lesnar, and Lesnar was to leave WWE for the UFC.

In probably the first of several major changes after Vince McMahon found out that Reigns was suffering from leukemia, he signed Lesnar to a new deal worth a lot of money and made the decision for him to beat Strowman and regain the Universal Championship.

“It is believed that deal went down around October 18. Terms of the deal have been kept secret. What is known is that this is another short-term deal. The deal does go through WrestleMania,” Meltzer wrote.

“How often Lesnar will be working on the new deal is unknown. He will be at Survivor Series facing AJ Styles. He won’t be at TLC. It is not clear if he will be at Royal Rumble, but given they are doing a stadium show, he will probably be, and he has a planned match at WrestleMania.”

The deal allows him to accept a UFC fight, but whether Lesnar will do that while contracted to WWE is unknown. UFC officials want him to fight UFC Heavyweight Championship Daniel Cormier on March 2 at UFC 235 in Las Vegas, Nevada.

“Is that advisable to work the Rumble in what would be the middle of a training camp?” Meltzer wrote. “There is a clear risk of an injury, including a concussion, in a UFC fight that would be five weeks before Mania, where his match, just by the fact of his paycheck, would have to be considered one of the biggest events on the show.”

While most fans saw Lesnar vs. Strowman as a shocking squash match that took the monster aura from Strowman, that was not WWE’s intent.

The idea, which the announcers failed to get over, was that it wasn’t Lesnar destroying him, but Lesnar giving an already knocked out Strowman one F-5 after another, including one over the top rope to the floor, and Strowman kept kicking out. The idea was to get you to want to see the rematch where Strowman finally gets his hands on Lesnar.