Bayley Gives Update On Shoulder Injury, Says This Hasn’t Been Her Best Year 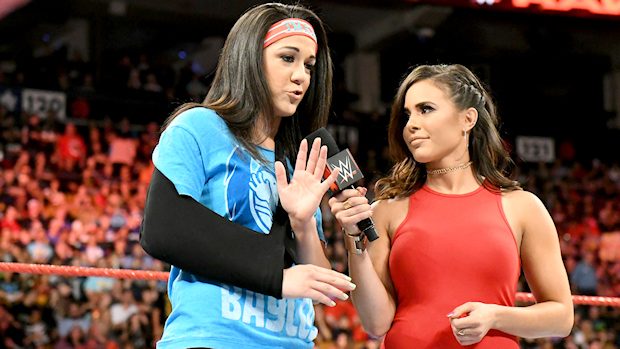 Even though she isn’t appearing at the show, Bayley is in New York for SummerSlam and she gave a new update on her shoulder injury.

During an interview with PWInsider.com on Tuesday at a Be a STAR rally at Kips Bay Boys & Girls Club in Bronx, New York, Bayley confirmed that she is dealing with a grade-two separation and explained, “It’s like the AC joint and the ligaments and all that stuff, so it’s not easy.”

Bayley admits she doesn’t know how long she’ll be out yet, but confirmed she has started physical therapy, adding, “Just within the past couple of weeks, I think it’s been two weeks now, I’ve actually been able to move it a little bit and the swelling has gone down a lot. So, the motion is coming back a little bit more, but it’s more about getting the strength and being able to lift my arm in front of me.”

The former Raw Women’s Champion concluded by saying, “So, the motion is coming back a little bit more, but it’s more about getting the strength and being able to lift my arm in front of me.”

On July 24, Bayley beat Sasha Banks to earn an opportunity to challenge Raw Women’s Champion Alexa Bliss at SummerSlam. Bayley suffered a shoulder injury during her match against Nia Jax the following week. One week later, it was revealed that the injury to Bayley was a separated shoulder, and thus would leave her unable to compete.

Bayley also talked about her up-and-down year in WWE and how long she plans on wrestling for the company.

“Being where I am now, there’s obviously routes that I would have rather taken, being with WWE. You know, there’s tons of things I wish I would have done differently, or matches that I wish would’ve gone differently. But, I’m just kind of going one day at a time, or one month at a time. Because, I told myself this when it happened, but, I’m gonna be doing this a long time,” Bayley said.

“Like, I don’t plan on leaving WWE for a very long time; as long as my body can handle the in-ring action. So, even if this wasn’t the best year that Bayley’s had, there’s gonna be way more, and I guarantee that [it will] pick on up.”