Bayley Has A New Partner For WWE Mixed Match Challenge 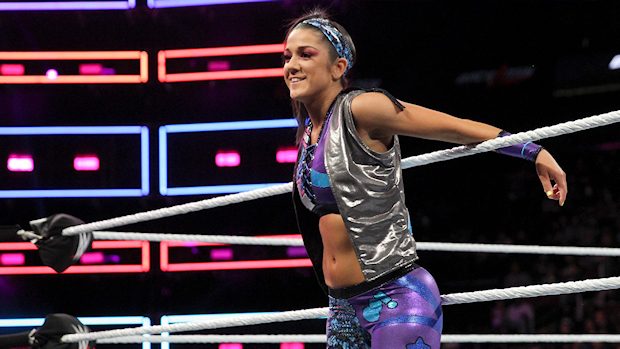 This week on the WWE Mixed Match Challenge Semifinals, the final four teams will square off tonight at 10 ET/7 PT on Facebook Watch to see who is heading into the finals at WWE TLC: Tables, Ladders & Chairs.

In the wake of the news that Finn Balor suffered an injury and won’t be able to compete in the Mixed Match Challenge Semifinals, Apollo Crews has been named as his replacement. Together, Crews and Bayley will battle Jinder Mahal and Alicia Fox.

In this backstage interview with Charly Caruso, Bayley reacts to Crews replacing Balor as her tag team partner.

Plus, The Miz and Asuka, who won Season 1 of Mixed Match Challenge, must find a way to overcome their recent differences and take down the dancing duo of R-Truth and Carmella.

Bayley beat Fox on Raw last night, with Crews and Sasha Banks helping to even the odds against Mahal and The Singh Brothers.

The last team standing will receive the coveted 30th entry in their Royal Rumble Matches in January 2019, giving them a greater opportunity to win before going on to headline WrestleMania 35. In addition, they will receive an all-expenses-paid vacation to anywhere in the world.

Alexa Bliss, Banks, Kevin Owens, Braun Strowman, and AJ Styles (as part of a storyline where he got attacked by Daniel Bryan after the match where Bryan won the WWE Championship from Styles) are the other WWE Superstars who have been replaced over the course of Mixed Match Challenge Season 2.