Is Becky Lynch Still A Member Of SmackDown LIVE?, 5 Things That Only Seth Rollins Has Done, Ride Along - PWPIX.net

Home / Wrestling News / WWE News / Is Becky Lynch Still A Member Of SmackDown LIVE?, 5 Things That Only Seth Rollins Has Done, Ride Along

Is Becky Lynch Still A Member Of SmackDown LIVE?, 5 Things That Only Seth Rollins Has Done, Ride Along 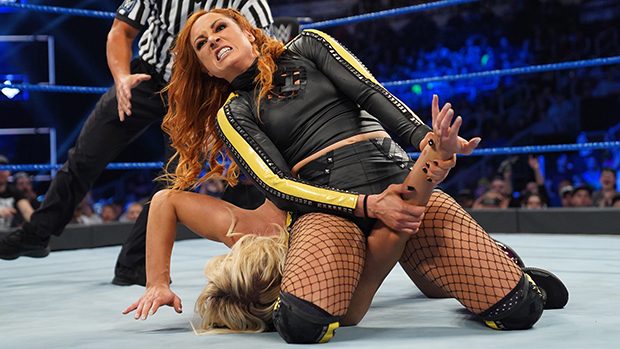 With tensions clearly still running high after Sunday night, it appeared that Becky was closing in on victory when she locked in the Dis-arm-her on Flair. However, “The Man” lost the hold when Evans took advantage of Lynch’s positioning by knocking her down with the Woman’s Right. With Lynch down, Bayley tagged herself in and got Lacey out of the ring. From there, Bayley reversed a Figure-Four attempt into a rollup for the win. However, with each having a title the other wanted, it wasn’t all smiles between Bayley and Becky after the match, with the two clearly bickering a bit after the win.

— Universal Champion Seth Rollins has accomplished a lot in WWE and he’s the only person to achieve these five things.

— A new episode of WWE Ride Along airs this Monday night on the WWE Network immediately following Raw. The episode will feature Lana and Rusev in one car and Mandy Rose and Sonya Deville in the other. Here is the synopsis:

“Lana and Rusev compete to prove who is No. 1, while Mandy Rose and Sonya Deville satisfy their sweet cravings en route to SmackDown Live!”