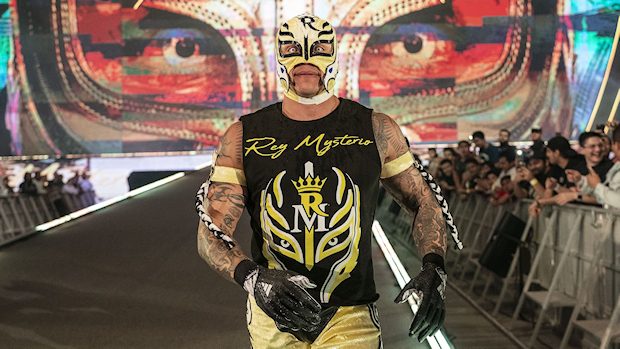 Rey Mysterio took to Instagram on Thursday and revealed that he suffered a separated AC joint in his left shoulder.

Mysterio said the injury occurred at WWE Money in the Bank on Sunday when he beat Samoa Joe in a quick match to win the United States Championship.

The bout was marred by controversy as Joe had his shoulder up during the decisive pinfall. Even so, Mysterio was awarded the win and the title.

After the match, Joe decimated Mysterio while Dominick watched in horror from ringside.

Mysterio did not appear on Raw, but Joe cut a backstage promo in which he called for Mysterio to do the right thing by handing the United States Championship back to him.

“Rey, I’m giving you the opportunity to lead by example. To be the man that I know you hope Dominick grows to be,” Joe said, once again invoking the name of Mysterio’s son. “Because if you don’t, just imagine the example that I will set for you.”

In the Instagram video, Mysterio said he has been struggling to lift his left arm since suffering the injury. Mysterio is shown undergoing treatment.

Thank you 🙏🏼 @thelabprc for putting me back together & always looking out for me! Highly recommend any athlete or non athlete with injuries to stop by and let them look out for you! #TheStaffIsNumero1 #Cryo #Sauna #PRP #MuchLove

Given Mysterio’s status, it is unclear if he will be forced to miss some time. If he does, it is possible Mysterio will either relinquish the championship back to Joe and vacate it all together.

The future of the United States Championship will become clearer this Monday night on Raw since Mysterio is advertised to address Joe’s demand.

Related ItemsMoney in the Bank NewsRey Mysterio NewsSamoa Joe News
← Previous Story Aleister Black Not Appearing At WWE Super ShowDown Because Of His Tattoos
Next Story → Is Becky Lynch Still A Member Of SmackDown LIVE?, 5 Things That Only Seth Rollins Has Done, Ride Along