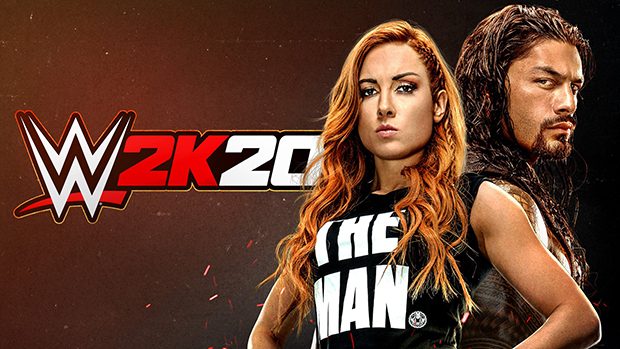 Becky Lynch and Roman Reigns are the cover Superstars for WWE 2K20.

On Monday, 2K officially announced the Raw Women’s Champion and “The Big Dog” as the cover Superstars of the upcoming edition of the WWE video game franchise. The world-renowned video game publisher confirmed its historic selection and other details about WWE 2K20, including the worldwide release date on October 22, 2019 for the PlayStation 4 computer entertainment system and the Xbox One family of devices, including the Xbox One X and Windows PC.

“My career has been about breaking barriers and doing what nobody else has done before,” Lynch said in the press release. “Being the first female Superstar on the cover of a WWE 2K video game is no exception.”

Lynch and Reigns can now count themselves among a small but significant group of wrestlers who previously served as the face of the WWE 2K franchise. 2K’s past choices for the coveted spot include CM Punk, “Stone Cold” Steve Austin, Dwayne “The Rock” Johnson, John Cena, Brock Lesnar, Seth Rollins and last year’s cover Superstar, AJ Styles.

“As a gamer myself, being on the cover of WWE 2K20 alongside ‘The Man’ Becky Lynch and joining the likes of Dwayne “The Rock” Johnson and John Cena is a huge career and personal milestone for me,” Reigns said.

Vince McMahon and WWE 2K18 cover star Seth Rollins took to Twitter on Wednesday to congratulate Lynch and Reigns on landing the cover of WWE 2K20.

McMahon wrote, “Congratulations to @BeckyLynchWWE and @WWERomanReigns on forming the ultimate @WWEgames Mixed Tag Team on the cover of #WWE2K20.”

Rollins added, “The two most deserving humans I know. Leaders of the industry and pushing our business forward. #WWE2K20.”

Congratulations to @BeckyLynchWWE and @WWERomanReigns on forming the ultimate @WWEgames Mixed Tag Team on the cover of #WWE2K20! https://t.co/lbNFlnkA6w

The two most deserving humans I know. Leaders of the industry and pushing our business forward. #WWE2K20 https://t.co/0ylVdWxuQf

In addition to its cover Superstar selection, 2K provided the first glimpse of what gamers can expect from WWE 2K20. The features confirmed for the game include:

“The ability to compete as male and female Superstars in MyCareer and Mixed Tag Team Matches.

“The return of WWE Towers mode, including an all-new Tower inspired by the storied career of Roman Reigns.

“The WWE 2K20 Deluxe Edition, which contains a copy of the game with special packaging, a complete set of WWE 2K20 Originals, access to the Accelerator, MyCareer Kickstart, WWE SuperCard limited edition cards, additional digital content offerings including the WWE 2K debut of Chyna as a playable character and more.

“The WWE 2K20 Collector’s Edition, which pays homage to the 20th Anniversary of SmackDown and contains the same features as the Deluxe Edition plus exclusive and rare collectibles.”

Further details about what content will be available in each edition will be announced by 2K in the near future.

Click here to see hi-res screenshots of Bayley (from behind), Brock Lesnar and Roman Reigns.