Becky Lynch On Being Compared To "Stone Cold" Steve Austin, Whether She's A Heel - PWPIX.net

Becky Lynch On Being Compared To “Stone Cold” Steve Austin, Whether She’s A Heel 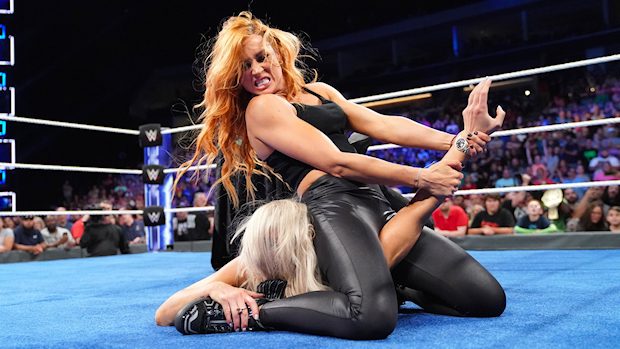 Becky Lynch’s change of character at SummerSlam was initially supposed to be a hard heel turn. On the first episode of SmackDown LIVE after the pay-per-view event, “The Irish Lass Kicker” came out and insulted the fans. Due to the overwhelming crowd reaction, WWE has apparently backed off the traditional heel story and Lynch is now more of a “cool heel.”

WWE Hall of Fame broadcaster Jim Ross recently said on his podcast that Lynch’s crowd reactions are similar to what “Stone Cold” Steve Austin was getting when his character broke out in 1997 and 1998.

Groundswell support @WWE Universe is giving @BeckyLynchWWE is reminiscent of the @steveaustinBSR fan appeal in '96/'97…I talk about this on my latest #WestwoodOne podcast "The Jim Ross Report", which also features @reymysterio @CodyRhodes this week 👇https://t.co/41EMtypqcr pic.twitter.com/jpYKKmnABK

“That means the world. You can’t get a better comparison than being compared to “Stone Cold” Steve Austin,” Lynch said during an interview with Las Cruces Sun-News. “He’s one of the greatest. He’s so smart in how he did things, his reactions and how we would sell things. Just his charisma and how we would talk. It was impossible to not want to cheer that guy because he was doing what we all wanted to do. None of us want to take crap from anybody and I think that’s the same thing Becky Lynch is doing right now too. That’s the highest honor you could possibly be given.”

Lynch went on to describe her character and on-screen motives.

“Whatever I am doing right now, I am loving it,” Lynch said when asked if she prefers working babyface or heel. “Whatever this is, I love it.”

She continued, “Just in general, people around the world … you try and be the nice person, always. Everybody. And I think this is so relatable. For the most part, people are generally good and want to do the right thing. And sometimes, it just backfires on you. My dad used to always tell me no good deed goes unpunished. And I think that’s what you’re seeing with Becky right now, that she’s always done the right thing and it hasn’t gotten her where she wants it. And now she’s had enough and she’s saying ‘I don’t care who’s in my way.’

“I left home at 16, traveled the world and slept on people’s couches. I came with a goal and I haven’t gotten that because I have been too focused on doing the right thing always when other people aren’t. That’s what we’re seeing and she’s had enough … she’s not letting them be an obstacle anymore.”