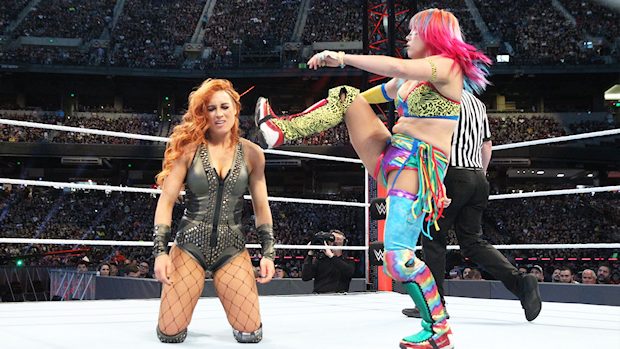 Fans watching the Royal Rumble were left baffled during Becky Lynch’s match with Asuka as the screen cut to black amid a suspected wardrobe malfunction.

The gaffe happened about midway through their SmackDown Women’s Championship Match as WWE cut the live television feed from Chase Field in Phoenix, Arizona.

Fans were quick to notice the unexplained blackout, with many suggesting it was a wardrobe malfunction. Lynch was adjusting her gear when the feed returned, but the blackout covered up whatever went wrong for Lynch.

Social media was sent into a frenzy over the incident, with viewers left in shock and creating a stir. However, an uncensored video of the incident surfaced shows that Lynch didn’t actually suffer a wardrobe malfunction. Lynch seemed to think she did by quickly adjusting her gear, but she actually didn’t.

Lynch struggled with her top throughout the bout and continued to adjust it.

A similar incident happened last week on Raw as Sasha Banks’ tights fell down to expose her backside.