Why Betting Sites Were Way Off For SummerSlam - PWPIX.net

Why Betting Sites Were Way Off For SummerSlam 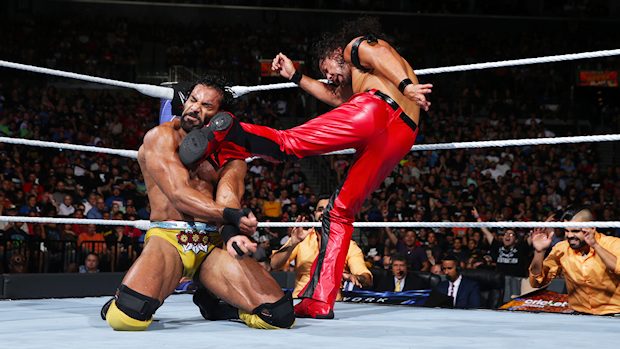 Betting sites were way off for SummerSlam last night as there five upsets out of 13 matches. BetWrestling.com explains here why this was the case.

The smart money odds never came in for this year’s Summerslam and it appears WWE has finally sealed the leaks that have been affecting the betting odds for years. Time will tell if this is a permanent policy to keep the outcomes under wraps. As a result, there were 5 upsets out of 13 matches.

While Shinsuke Nakamura had been heavily favored to defeat Jinder Mahal in the WWE Championship match, those odds flipped hours before the match slightly in Mahal’s favor. Jinder ended up winning. Not exactly an upset by the final odds, however, Nakamura was at -1500 at one point, so earlier bets on Mahal paid off nicely. The Smackdown Women’s Championship also flipped before the event in Natalya’s favor, as well and held up with Natty beating Naomi for the title.

John Cena was a slight underdog against Baron Corbin, however, was able to win and this can be considered an upset.

Sasha Banks was able to win the WWE Raw Championship from Alexa Bliss as a slight underdog, however, Banks had been favored throughout most of the week the before the odds flipped in Bliss’ favor. Another upset.

Rusev was surprisingly favored to win from early on and was able to hold on to the favorability up until the bell rang. Randy Orton pulled off the victory anyway, yet another upset.

The Usos, a +400 underdog, managed to successfully regain the Smackdown Tag Team Championships against the New Day at -600. Even in the first preshow match, the odds did not hold up. The Miz and The Miztourage upset The Hardy Boyz and Jason Jordan.

If this trend continues, the landscape of the betting odds has effectively been changes and smart money leading to spoilers could be history.