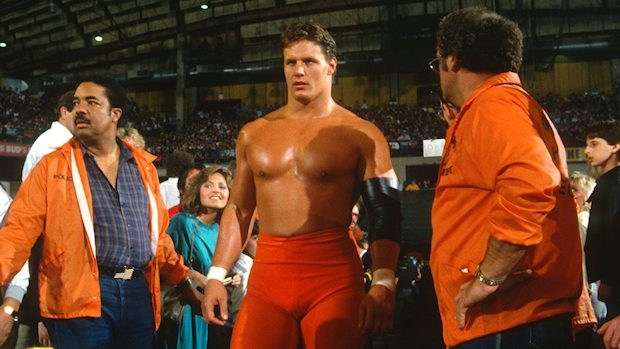 WrestleMania 2 competitor and former Atlanta Falcon Bill Fralic passed away on Thursday at the age of 56 following a battle with cancer.

In 1986, Fralic competed in the 20-Man Battle Royal at WrestleMania 2, which pitted past and present NFL players against WWF Superstars like Andre the Giant, Big John Studd, Bruno Sammartino, and The Hart Foundation. The final three competitors were Andre and both members of The Hart Foundation – Bret Hart and Jim “The Anvil Neidhart. Andre eliminated Neidhart and then Hart to win the 20-Man Battle Royal.

“WWE is saddened to learn that four-time NFL Pro Bowl guard and WrestleMania 2 competitor Bill Fralic has passed away.

“Fralic participated in the 20-Man Battle Royal at the second Show of Shows, which pitted NFL greats like Fralic, William “The Refrigerator” Perry, Russ Francis and Jimbo Covert against WWE Superstars like Bruno Sammartino, Andre the Giant and The Hart Foundation.

“WWE extends its condolences to Fralic’s family, friends and fans.”

Fralic also appeared as a guest commentator and host with Jim Ross on WCW Saturday Night on April 25, 1992 (this episode is available on the WWE Network). Fralic did commentary for the main event, which saw Barry Windham unsuccessfully challenge “Stunning” Steve Austin for the WCW World Television Championship in a 2-out-of-3 Falls Match.

Fralic, an offensive lineman, played nine seasons in the NFL, from 1985 to 1993, including eight with the Atlanta Falcons. He spent his final season with the Detroit Lions. The Falcons selected Fralic with the second overall pick in the 1985 NFL Draft. He started in 131 of the 132 games he played in.

Fralic attended the University of Pittsburgh and was a three-time All-American, gaining induction into the College Football Hall of Fame in 1998.

Bill Goldberg, who played alongside Fralic in 1992, tweeted the following on his passing: