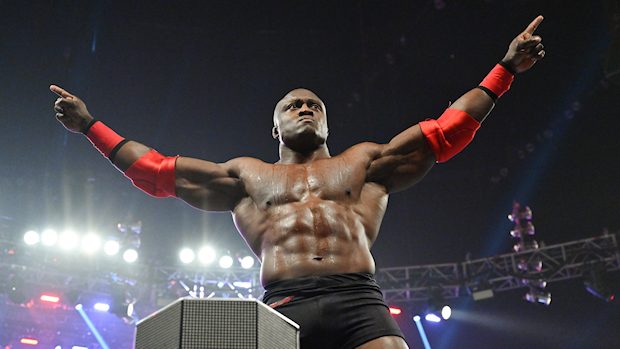 Last Friday, Bobby Lashley made a point of marking the amount of time since he’d held WWE gold.

“The All Mighty” can stop the clock now. Following a power play on last week’s Raw that thrust him into the Intercontinental Title picture, Lashley finally broke his championship drought on Raw tonight by winning a Triple Threat Match against Dean Ambrose and Seth Rollins to win the title for the first time in his career.

The finish came when Lio Rush interfered, sending Rollins off the top rope as Lashley and Ambrose were in the ring. Lashley then speared Ambrose to win the title.

In this post-match interview with Dasha Fuentes, Lashley talked about his big win.

“I think this is a lot of misunderstanding going around here because of what I did. I got Lio here, we came up with a plan and we executed. And now look where we’re at.”

Rush said people don’t understand or get it because they’re cheering for the wrong person. Rush said Lashley came back to WWE as a hero and is doing things unimaginable. Rush declares this “The Misunderstood Era” because Lashley is exactly where he’s supposed to be — champion.

Ambrose held the title for less than a month — 29 days — defeating Rollins at WWE TLC on December 16. Rollins wanted another match with Ambrose for the title, which he got on Raw last week. The match, however, was stopped by Lashley, who brawled with Rollins at the start of the show. Lashley laid him out and let Ambrose cover him for the win, which led to tonight’s Triple Threat Match.