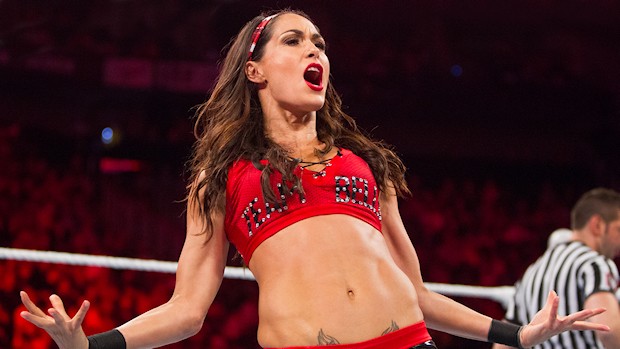 Brie Bella has retired from wrestling.

The 35-year-old broke the news to her family during night’s episode of Total Bellas, which was recorded prior to last October’s WWE Evolution pay-per-view event.

“Bryan and I have an announcement!” Brie exclaimed during a beach picnic. “I decided that after Evolution, I’m gonna be fully retired,” she added. “Fully done.”

That wasn’t her only announcement as Brie also shared that she and Daniel Bryan would be leaving San Diego, California and back to Phoenix, Arizona.

“Bryan and I are looking for a house in Phoenix,” Brie said. “Cause we’re moving back!”

After more than a decade in the ring, Brie knew it was time to leave wrestling behind.

“I love WWE, but the one thing I learned is that I can’t do everything. I just can’t,” Brie said.

“I know deep down inside that I’m making the right decision, that the boots have to be hung, that I need to go back to Phoenix and just really put more concentration on the things that are in my future instead of what was in my past.”

Hearing that her sister planned to retire and leave San Diego all at once took sister Nikki by surprise.

“Talk about dropping two huge bombs,” Nikki told the confessional camera. “I guess retirement I always thought would be something that Brie and I would talk about together. I just did not expect this big change after such an incredible comeback.”

Aside from a hiatus in 2012 and 2013, Brie has been with WWE since 2007. Citing family reasons, Brie took an extended break from in-ring competition in 2016 but continued to work for WWE as an ambassador. Brie returned to the ring in January 2018 for the first-ever Women’s Royal Rumble Match. She would not wrestle again until August, at which point she engaged in simultaneous feuds with The Squad on Raw and Maryse on SmackDown LIVE.

At WWE Super Show-Down on October 6, Brie teamed with Nikki and Ronda Rousey to beat The Squad. Two nights later on Raw, The Bella Twins and Rousey defeated The Squad in what turned out to be Brie’s final match. Immediately afterward, Brie joined Nikki in attacking Rousey, with Brie turning heel for the first time since 2015.

Brie had only one title win in her WWE career. On the April 11, 2011 episode of Raw, Brie defeated Eve to capture the Divas Championship.