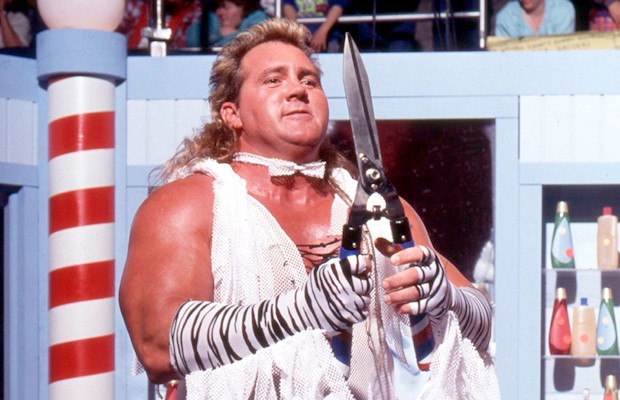 Former WWE and WCW star Brutus “The Barber” Beefcake (Ed Leslie) recently appeared on Interactive Wrestling Radio. You can download the full show at this link. They sent the following highlights to us:

Why 80’s and 90’s wrestling nostalgia is so strong:

“That was the hay-day of our business. There were so many electrifying guys… The personalities, the stories that were going on. People just fell in love with wrestling. It was a great time! Even Hollywood jumped on board. They wouldn’t have anything to do with us in the 60’s and 70’s! It is a great honor to have been part of that. I’m happy to be alive still because a lot of my compadres aren’t. It saddens me horribly to think of all the friends who should be sitting here now. But, I’m happy to be part of it!”

“My mentors were Baron Von Raschke, Verne Gagne, Bobby Duncum, Mr. Wrestling II, Ivan Koloff, Bobo Brazil… Old time. Guys from the 60’s and 70’s and it made a big difference in my life. It helps for some of these younger guys, up and coming guys, to be able to rub elbows with us… Especially us because we were the privileged few who did it like it has never been done before and never will be done again. ”

Why wrestling isn’t as popular as it once was:

Brutus says part of it is the personalities and part of it is the stories. “We kept it simple – Good guy versus bad guy. Not 5,000 side stories and variables. It gets lost in translation. That was the beauty of our era… We kept it simple. We made it believable. We worked our butts off out there night after night….. The amount of professionalism our business demanded!”

The word “fake” and pro wrestling:

Brutus says he was talking to people earlier today who asked about a match he had with Rick Rude and they said “it had to be fake.” Brutus says, “Fake isn’t a good word because it is not the way it is. Yeah, I’m hitting him. I’m hitting him! But, I’m not trying to break his nose. He full well knows he’s got someone out there hitting him. But, we’ve got to wrestle tomorrow night too. I’m going to take care of him and make sure he’s OK because if I can’t wrestle him tomorrow night, I’m out of a job.”

Brutus says it was difficult to train people who never wrestled or really ever wanted to. But, rewarding to see how some of them did come along. He has hgih praise for Todd Bridges but calls Danny Bonaduce an “arrogant prick.” He does say that it was fun to be a part of and even throws a little love Bonaduce’s way saying he did greatly improve by the end of the run.

Hulk Hogan and if he can emerge from his recent “incoming” of bad press:

“Absolutely! I don’t know about unscathed but Hulk is a survivor.. He is an innovator! He is the leader of the pack! He was miles… Lets just f***ing tell the truth, he was light-years ahead of people! He took Vince McMahon’s company from below the ground floor at the Lincoln Hotel in Boston where they were all having dinner to Olar, the planet from the Avengers movie. They say one good deed can’t off-set one bad deed. But, one million? A zillion good deeds? He’s a guy I’ve known all my life. Everybody makes mistakes. The Lord says forgive and forget. Turn the other cheek. Move on! Forgiveness! To forgive is divine. People need to understand he’s not perfect. He’s had tough times in his lifetime… He’s human too. Everyone thought he was super-human. Well, Hulk Hogan was human for a minute and did some stupid stuff… Nothing we all haven’t done. If you haven’t done anything wrong, here’s a stone. I don’t know who else is going to have a stone!”

Why he never worked for TNA, especially during the Hulk Hogan era:
“I was there several times. I spoke to Dixie about bringing me in. In the end, I don’t care. They needed me a lot more than I needed them. They needed my credibility which is unquestioned.”