Home / Wrestling News / Diva News / Carmella on Enzo Amore and Colin Cassady Going to WWE’s Main Roster, What to Expect from Her Now

Carmella on Enzo Amore and Colin Cassady Going to WWE’s Main Roster, What to Expect from Her Now 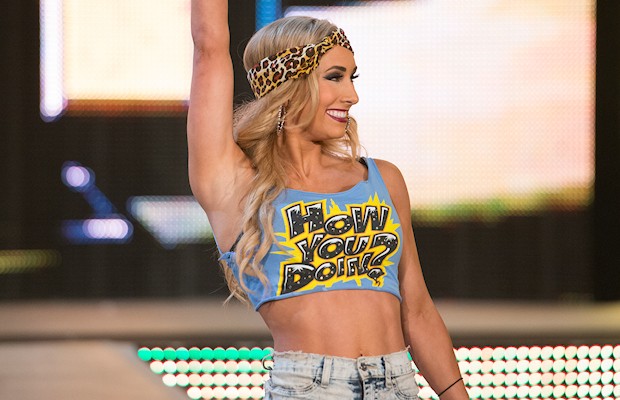 – WWE’s website recently spoke with WWE NXT Superstar Carmella about Enzo Amore and Colin Cassady debuting on the main roster, her future in NXT and more. The full interview is at this link. Below are highlights:

Not debuting on RAW with the duo:

“My entire NXT career has been alongside Cass & Enzo. Of course, it would have been nice to be out there and relish in the moment of their debut on the night after WrestleMania with them. But, I’m here to be a Superstar and an in-ring performer. I’ve been training for over two years in the ring now. A lot of the fans don’t necessarily get to see what I can do, because they’ve seen me as the hype girl for Cass & Enzo. I’m here to compete at a higher level. I want to be NXT Women’s Champion. Unfortunately, I can’t do everything. I can’t be with them and take over the NXT Women’s division at the same time. Of course, it’s a little sad to not be with them, but it’s a super-exciting time for me to break out on my own.”

If she’s ready to go at it alone:

“Of course. It’s a great opportunity for me. It’s really exciting to be a part of the Women’s division here in NXT. Now that my focus isn’t with Cass & Enzo, it’s on me. I can show the NXT Universe what I’ve been working on in the ring over the last two years. It’s my time to shine and get the NXT Women’s Championship.”

“It’s exciting. Bayley was an incredible champion. As my best friend, I’m so supportive of her and I wanted to see her retain the title at TakeOver: Dallas. However, Asuka is a force to be reckoned with. She made a statement from the moment she debuted in NXT. It changes everything. There’s no one like her in NXT, with her hard strikes and submissions. She’s going to make everyone step up their game. I’m ready and willing to do just that.”

What fans can expect to see from her now:

“They’ll see a big change in me. My focus is just on me and on becoming NXT Women’s Champion. I don’t have to worry about what my boys are doing now. I support them and I’m so excited to see their success. But now, everyone gets to see Carmella and who she really is. I’m not just the hype girl.”