Charlotte On Ric Flair Not Remembering Her When He Woke Up, Being Embarrassed By Her Past Marriages - PWPIX.net

Home / Wrestling News / WWE News / Charlotte On Ric Flair Not Remembering Her When He Woke Up, Being Embarrassed By Her Past Marriages

Charlotte On Ric Flair Not Remembering Her When He Woke Up, Being Embarrassed By Her Past Marriages 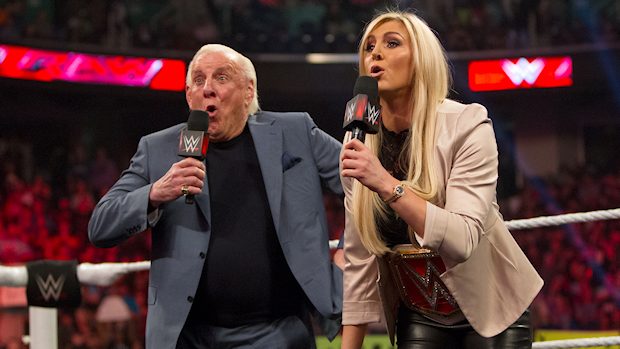 Charlotte Flair was a guest on this week’s Sam Roberts Wrestling Podcast, where she talked to Sam about Ric Flair’s originally bad diagnosis, and Ric not remembering her when he came off the machines … but strutting in the ICU.

Charlotte on finding out Ric was sick

“I had just got back from China. I got there and I was like, okay I know it’s serious and the doctor was honest with us and said that my dad wasn’t breathing on his own and they didn’t want to do the surgery, but if they didn’t do the surgery then he was going to die. But they couldn’t say he was going to make it out of the surgery and his chances weren’t great so she told us to say our goodbyes. Me and my sister and my brother were like what the ….. How do you say goodbye to someone who wasn’t there? With my dad it’s like he is unbreakable so you don’t take it serious, but knowing that my dad never gets sick we were like okay, something is wrong.”

Charlotte on Ric not remembering her, and strutting in the ICU

“When he was first taken off the machine and the doctors wanted to have him walk around, obviously he needed help and support but he didn’t even know who I was, and he was just pushing the walker and quoting numbers of towns from shows in the 80’s. I was like, that’s great he can quote me the numbers from a show in Chicago in the 80’s but he doesn’t know who I am? I would just sit there and listen to him quote the numbers and was just like this is crazy. So, he is pushing the walker with the nurses and he is pushing and pushing and then he just stops and starts strutting in the ICU. He doesn’t know who I am, isn’t really talking but just does the strut and I was just like this isn’t real. When his 30 for 30 comes out in November, you will realize wrestling is my dad’s first love and that’s what he lives for. That’s why I think we are so close because now I am in the industry that he loves so much so I get it, I get wanting to be the main event every night.”

Charlotte on being embarrassed by her previous marriages, and wanting to be more like “Charlotte”

“SR: Was there stuff that you weren’t sure you wanted to add in this?

CF: My marriage, that was one. I am open and honest about it but it’s really hard when people on social media are like ‘oh she’s just like her dad, married twice.’ I’m embarrassed of that, I am. I thought what is the best way to overcome it and that’s to talk about it and I can’t change it, and when people say she’s just like her dad, they don’t know. I journaled about it and it was therapeutic… Charlotte the character, I want to be Charlotte, that’s the funny thing, when I come through the curtain I want to be her. I tell people all the time if I could have that confidence in everyday life it would be different.

Charlotte on playing a “good guy” or “bad guy”

“I wasn’t thinking about being a good guy or a bad guy and that has been the transition for me on SmackDown, do you want me to be this good guy? Oh no, when I first heard that, you know where I went? I’ve just left NXT, I’m respected, not loved, what’s going to happen to my character again? Obviously having my on-screen friendship with Becky, because she is the most natural babyface I think that’s helped. I am just going on camera just being me and bringing in Charlotte a little bit and then not caring anymore. It’s like okay, well The Boss is still the Boss but guess what, she is the most popular, and just being okay with that, and not worrying if they respect you, you’re getting a reaction.”