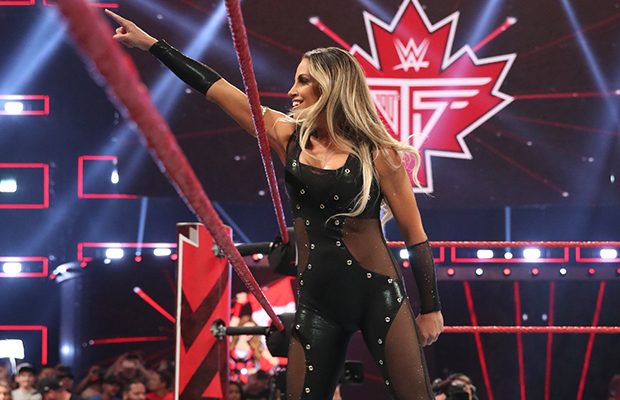 Will Trish Stratus’ match against Charlotte Flair tonight at SummerSlam really be her last?

While doing media interviews on Wednesday to promote her match, the WWE Hall of Famer said it will be the final bout of her career. After wrapping up her media day, Stratus relayed the announcement on Twitter.

That’s a wrap on media day #1! First flight out of Detroit then hopped right into media talking about taking on @MsCharlotteWWE in my FINAL match this Sunday … now on my way home to my littles!!! #SummerSlam @ETCanada @globalnewsto @CherylHickeyETC pic.twitter.com/21e9ZSfXF3

Stratus announced her retirement from the ring in 2006 and competed in her last match at Unforgiven in September of that year, beating Lita to win the WWE Women’s Championship for the final time. Her retirement, however, was somewhat short-lived as she returned to the ring in 2008, albeit on an part-time basis. She stopped wrestling in 2011 until returning last year for the inaugural Women’s Royal Rumble Match and two tag team matches in October.

During an interview with Busted Open Radio on Friday, Stratus strongly indicated that her match with Flair will be her last.

“No, oh my God. 100 percent, like, how much more closure could you get being away for this long already,” Status said when asked if she thought there’d be a time that she’d back in the ring again.

Stratus continued, “Charlotte and I in the ring, it was just like you couldn’t put together a better … I feel like this is sort of a good final match for me. I don’t think you could really do anything more than this … It feels like a good ending for me. A real ending.”

You can listen to Stratus discuss her thoughts on retiring below.

Hometown crowd.
One-on-one against the best the current division has to offer.@trishstratuscom tells @davidlagreca1 & @bullyray5150 why her match with @MsCharlotteWWE at #SummerSlam is the fitting final chapter. pic.twitter.com/ZyGYyY0B6L