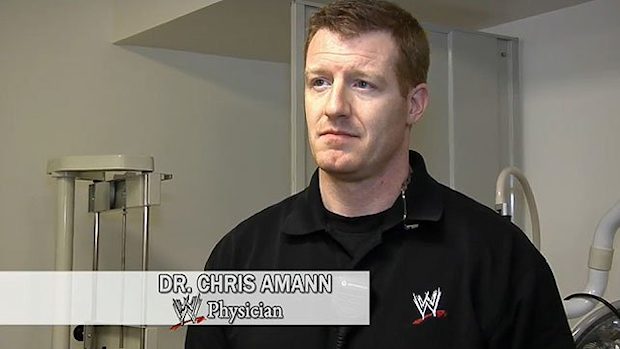 The three year legal battle between CM Punk — real name Phillip Jack Brooks — and longtime friend Scott Colton (aka Colt Cabana) as defendants in a defamation lawsuit brought on by WWE Senior Ringside Physician Dr. Chris Amann ended on June 5 with the jury ruling against Amann; he is not entitled to monetary damages.

Amann’s attorneys, earlier that morning in their closing remarks, asked for $3,989,000. They came up with the figure based on $1 per listener of the podcast in question.

The trial unveiled a myriad of potential issues for Amann including HIPAA privacy violations and incomplete record-keeping, but there might be a deeper issue at play which could have ramifications on his career as a physician.

According to a report on Thursday by David Bixenspan of Deadspin.com, Amann filed a number of motions the week before the trial, mostly with the intent of making sure that various issues couldn’t be brought up before the jury. One of those motions argued that at trial, the defense could not reference his romantic and sexual relationships with then-WWE wrestler (or WWE Diva, if you will) Jillian Hall and an independent female wrestler who he met at a WWE tryout event (the independent wrestler was not named).

The motion appears to have been successful, as none of this was brought up at the trial, much less in front of the jury. The motion to exclude also says that the defense asked Amann if his relationship with a different woman, an independent wrestler who tried out twice for WWE and failed to earn a contract, “violated his obligations as a physician.”

Reached by phone, Hall gave Deadspin.com permission to use her name in the story. Hall confirmed that she had a romantic relationship with Amann while he was the traveling doctor overseeing WWE’s Raw brand, which she was part of from June 2007 through her departure in November 2010.

Amann began his tenure with WWE in May 2008.

Hall had no direct involvement with Amann’s case against Cabana and Punk.

Arthur Caplan, a medical ethics professor at New York University, told Bixenspan that “such a relationship would be obviously out of line for a physician.”

“It’s a huge ethics no-no,” Caplan said. “You cannot have romantic relationships with your patients. There are a number of reasons why: First, it distorts your objectivity in terms of treating them. They can bamboozle you, or you can feel like ‘I wanna please them, so I’ll give them more pain meds,’ or whatever they’re asking for. Second, they have enough problems working with wrestlers because they have what we call dual loyalties.”

WWE doctors already have a difficult balance to strike in trying to honor both the organization and the patient’s interests, and a romantic relationship with a patient complicates that further. Caplan also cited the inherent power imbalance in a doctor/patient romance as something that could, for instance, make a doctor less likely to send the patient out for necessary second opinions.

Multiple requests for comment sent to Amann and his lawyers have not been returned as of Thursday. Asked about the court records revealing the relationship between Amann and Hall, a WWE spokesperson issued the following statement to Deadspin:

“We were not aware of this. We are investigating the matter and will determine if any action is warranted.”

One wrestler who was a member of the Raw roster at the time Amann and Hall were dating told Bixenspan that neither person tried to hide the relationship. Amann’s pre-trial motion also cites two other depositions that allude to his relationship with Hall.

There is a photo of Amann and Hall looking like a couple that Bixenspan linked to in the story. However, he doesn’t point out that it was taken in May 2014 and Hall posted it on her Twitter account at the time. The photo would indicate that Hall continued to date Amann long after her departure from WWE.

Click here to see the photo of Amann and Hall.

Finally, it’s worth noting that the court records revealing the relationship between Amann and Hall was not sealed. Bixenspan wonders why the records were entered as public as opposed to being filed under seal.

“Why was the damning pre-trial motion, exhibits and all, in the public court record and not filed under seal?” Bixenspan wrote.

“After all, Amann’s lawyers filed some other pre-trial motions with the contents hidden from public view, and the motion about his personal relationships with wrestlers clearly had merit because none of this was mentioned at trial.”