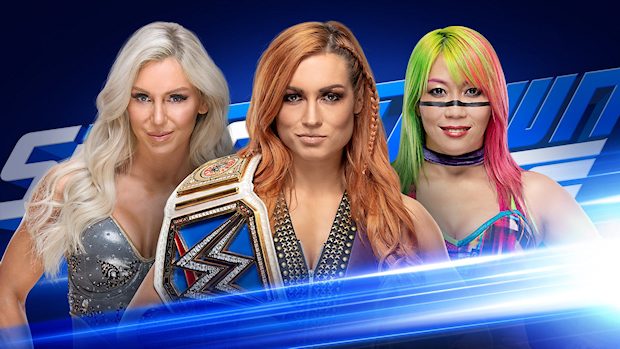 History was made last week with the confirmation of the first-ever Women’s Tables, Ladders and Chairs Match, which will see Becky Lynch defend the SmackDown Women’s Championship against Charlotte Flair and Asuka, the latter of whom won a Battle Royal to earn her way into the match. Tonight on SmackDown LIVE, all three Superstars will make this historic match official when they sign the contract for WWE TLC.

Another segment is set for SmackDown LIVE as WWE Champion Daniel Bryan will appear on “Miz TV.” Here is WWE.com‘s preview:

Daniel Bryan to appear on a must-see “Miz TV”

The WWE Universe is still baffled by the “new” Daniel Bryan and his unsettling attitude. The WWE Champion has attempted to give insight to his new outlook, but he’s only left fans with more questions.

There’s an unlikely Superstar who will try to get the truth behind the “new” Daniel Bryan tonight on SmackDown LIVE: The Miz! Can The A-Lister put aside his bitter rivalry with the WWE Champion in search of answers? Find out on what is sure to be a truly must-see edition of “Miz TV!”

WWE has also announced two matches for the show:

* Xavier Woods vs. Jey Uso vs. Cesaro in a Triple Threat Match

Though his 20th anniversary celebration was crashed by Samoa Joe, Jeff Hardy is reinvigorated and ready for whatever the future holds. Tonight, that means rekindling one of his most intense rivalries, as The Charismatic Enigma goes one-on-one with Randy Orton.

The bad blood between the two could not be contained by the squared circle and had to be settled in a truly brutal Hell in a Cell Match, which The Viper won. Can Hardy turn around his fortunes against WWE’s Apex Predator?

Woods, Uso and Cesaro square off in Triple Threat Match

A big Triple Threat Match for the SmackDown Tag Team Championship was announced for WWE TLC last week, as Sheamus & Cesaro will defend against The Usos and The New Day. This week on SmackDown LIVE, the WWE Universe will see a different kind of Triple Threat Match, with one member of each team squaring off in singles competition.

Who will claim a critical victory heading into WWE TLC: Xavier Woods, Jey Uso or The Swiss Cyborg?