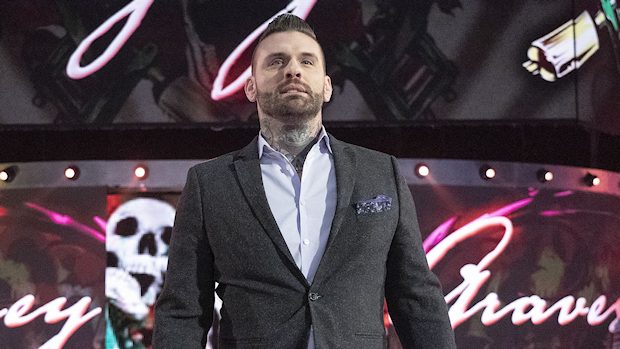 Braun Strowman and Bobby Lashley kicked off Raw with a Falls Count Anywhere Match, which came to a shocking conclusion when “The Monster Among Men” drove “The All Mighty” through the LED wall at the top of the entrance ram to set off a shower of sparks that briefly blacked out the arena.

Corey Graves reacted to the spot by saying “holy shit.” You can hear this in the video below.

– Corey Graves after Braun Strowman speared Bobby Lashley through the video board pic.twitter.com/29WJq0JiBB

While the line is allowed on cable television, it’s usually not heard on Raw or SmackDown LIVE since WWE presents a PG-rated product.

Following Raw, Graves joked on Twitter that he’s considering starting a GoFundMe campaign to raise money for the fine he’ll have to pay for cussing on WWE television.

Thinking of starting a GoFundMe page for this fine….#RAW 💸💸💸

Graves then responded to a fan who said that late comedian George Carlin — famous for his “Seven Words You Can Never Say on Television” routine — would be proud by noting he has “six [words] to go.”

According to Dave Meltzer on Wrestling Observer Radio and PWInsider’s Mike Johnson, Graves was scripted to say “holy shit.” Johnson also notes that the line was “planned and approved” by WWE management.

Raw airs on a seven-second delay, so it could have easily been bleeped out of the live broadcast. It was not bleeped out in Canada, Great Britain and the West Coast airing of Raw that aired three hours later on the USA Network. WWE’s YouTube upload of the angle did, however, censor Graves.