Do CM Punk and Lita Have Heat Due To AJ Lee? - PWPIX.net

Home / Backstage Stories / Do CM Punk and Lita Have Heat Due To AJ Lee?

Do CM Punk and Lita Have Heat Due To AJ Lee? 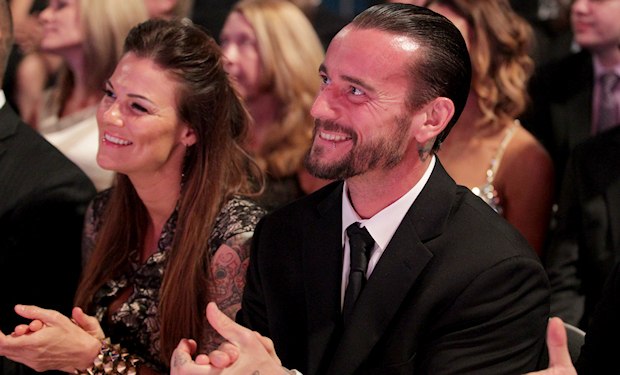 It is one of the most surreal moments in the history of a wrestler meeting somebody they were a fan of considering the personal lives of WWE Hall of Famer Amy “Lita” Dumas and Divas Champion AJ Lee. The fact that there is footage of their encounter (courtesy of WWE) makes it all the more surreal.

In the summer of 2001, Lita was riding high in what was then called the World Wrestling Federation while AJ, who was 13-years-old at the time, was in tears as she met her hero in person. She got Lita to sign her copy of the sports-entertainment organization’s recently-released bio cassette tape on her, Lita – It Just Feels Right, and even received a hug during the encounter. A cameraman then focused on AJ, who was sporting a Lita t-shirt, and had tears of joy on her face. My how times have changed, huh?

As members of the WWE Universe know by now, AJ married CM Punk on June 13, 2014. What’s noteworthy about that is that The Straight Edge Superstar had previously dated Lita. In fact, Lita was Punk’s girlfriend from 2012 to 2013 and even his date to the 2013 WWE Hall of Fame Induction Ceremony. They split up a few months after the event, Punk began dating AJ, and now they’re husband and wife.

All three grappling superstars are private people, so none of them have publicly said anything concerning this odd triangle. A former backstage worker for WWE, however, shed some light on it.

News of AJ’s marriage to Punk was immediately broken on Reddit.com by this former backstage worker, MetsFan4Ever, a verified WWE insider who has produced evidence of his past ties to the Stamford, Connecticut-based wrestling organization. After breaking news of their wedding, he revealed that Punk courted AJ while he was dating Lita.

“Lita would be off somewhere else in the building and Punk would be talking to AJ,” MetsFan4Ever said, while also noting that Lita attended most WWE events when she was in a relationship with Punk. “I thought it was kind of odd at the time.”

MetsFan4Ever continued, “I think a lot went on when Lita would be sitting by herself and he was chatting with AJ. A lot went down at the arena.”

On April 5, 2014, Lita took her rightful place in the WWE Hall of Fame (alongside fellow inductees Ultimate Warrior, Razor Ramon, Jake “The Snake” Roberts, Carlos Colon and Mr. T). However, the WWE insider says that Lita’s enshrinement would not have happened had Punk not bolted from WWE weeks earlier.

“If Punk was there it would not have happened. That’s all I know. Their breakup and dating AJ would not have sat well with all 3 parties. It would have been even more uncomfortable for Lita,” MetsFan4Ever said – WWE’s official announcement was made exactly two weeks after Punk informed Vince McMahon he was “going home.”

This romance triangle has also been a source of comedy within the sports-entertainment organization.

In November 2013, a crass cartoon drawing based on the infamous footage of a young AJ breaking down while meeting Lita surfaced online. Noting AJ’s desire to be like her Diva hero when she grows up, the cartoon pokes fun at her romantic relationship with Lita’s ex-boyfriend.

Widely attainable on social media, the cartoon of AJ in bed with Punk, according to F4WOnline.com, became a big hit in the WWE locker room.