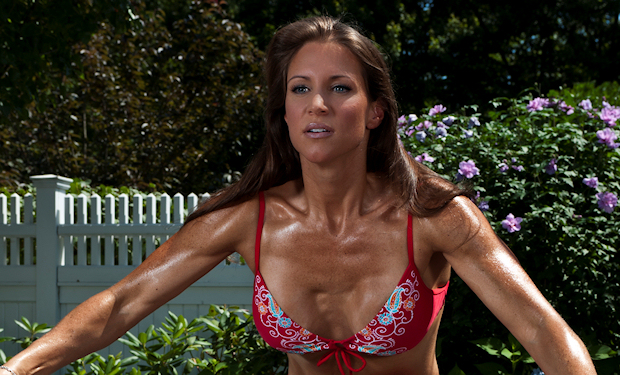 Even in WWE’s PG-era, many comments aren’t off limits and that includes boob jokes toward Stephanie McMahon.

During the “Attitude Era,” Stephanie’s obvious breast enhancement was a frequent target of The Rock and Chris Jericho. With John Cena now holding court as WWE’s resident jokester, he took the opportunity to poke fun at the WWE executive again over this.

Stephanie immediately snapped back, “They put me in action, but that’s another story.”

In spite of the joke being played, Stephanie actually had her breast implants removed several years ago – it’s not too obvious since she’s naturally busty.

Prior to giving birth to her first child, Aurora Rose Levesque, on July 24, 2006, Stephanie got rid of her enhancements. According to those in the know, she underwent the removal procedure because she wanted her newfound motherhood to go as seamless as possible. Plus, with her no longer appearing as a regular television character at the time, the large cans were no longer necessary.

In July 2001, Stephanie reemerged on WWE television with a new pair of gigantic, silicone-enhanced breasts, whether by design or otherwise, put the WWE Divas’ plastic in the shade. Amidst speculation concerning her noticeably enlarged chest, Stephanie claimed on August 14, 2001 during an appearance on The Opie and Anthony Show that she underwent breast augmentation surgery the previous month – shortly before she became the fictional owner of ECW. She claimed that her decision was provoked by seeing a sign in the audience suggesting that her breasts sagged. With the augmentation, McMahon revealed that her bra size was a D cup.