Are There Plans For Drew McIntyre and Finn Balor To Feud?, Jeff Hardy Impersonates Shinsuke Nakamura 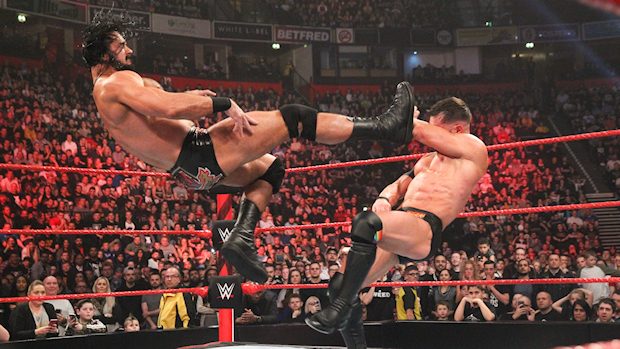 – Before facing Kurt Angle in the main event of Raw, Drew McIntyre forced Bobby Lashley out of the ring by his mere presence, then downed Finn Balor with a Claymore Kick after helping the Irishman to his feet in a fraudulent show of respect.

McIntyre helped Balor to his feet after his loss, but then he hit him with the Claymore Kick!

Baylor’s reaction from the crowd was right up there with Rollins and Elias tonight. #RAW pic.twitter.com/UxPXExjiQN

– In this video clip from Wednesday’s WWE live event in Nottingham, England, Jeff Hardy mockingly impersonates Shinsuke Nakamura when they square off.

– Here is video from WWE’s tryout camp in Cologne, Germany earlier this week.

WWE tryout attendees started off the tryout with a run through Cologne, passing some of the city’s most iconic sights, from the Cologne Cathedral to the Hohenzollern Bridge that crosses the Rhine River.