Did Ember Moon Get Injured By Alexa Bliss At The Royal Rumble? 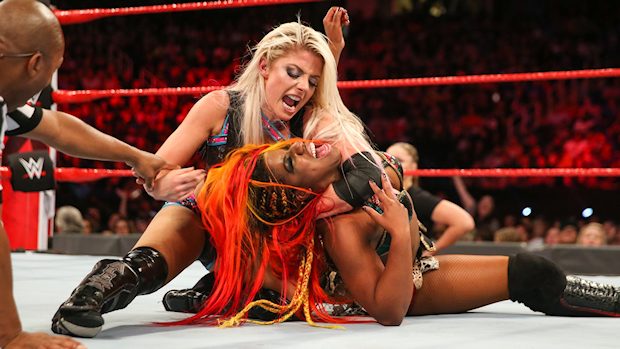 During Raw last Monday, Dana Brooke mentioned Moon being injured and her being Natalya’s first choice for a partner in a WWE Women’s Tag Team Championship Elimination Chamber Qualifying Match against Liv Morgan and Sarah Logan. After the show, WWE uploaded a video of Moon revealing that she sustained an injury to her elbow that will require immediate surgery.

“Last year when I entered the Royal Rumble, I wrestled with one arm and this year was no different. Just sadly, I messed up my elbow really bad and now I have to have immediate surgery,” Moon said.

“It’s hard to be here right now and just see everyone competing, and knowing that I’m on the shelf, and I don’t know how long but it is a while. So, I’m trying to stay positive, I’m trying to stay as positive as I can be in this situation. Hopefully here’s to the best, and I’ll see you guys soon.”

There is speculation that Alexa Bliss injured Moon during the Women’s Royal Rumble Match. With Moon down on the mat, Bliss did her signature flip and landed on Moon’s elbow. Bliss tweeted a clip of this on Monday and wrote “sorry” to Moon.

Moon confirmed that Bliss didn’t cause her elbow injury. In response to a tweet asking if Bliss injured her, Moon replied, “Nope.”

Bliss got annoyed by that fan suggesting that she injured Moon.

While it’s unclear when and how Moon injured her elbow, it may have had happened two weeks ago during a match on WWE Main Event where she teamed with Dana in a loss to Alicia Fox and Mickie James. A fan pointed out that Moon appeared to hurt her elbow after striking James. Immediately following the strike, Moon reacts as if she hurt her elbow.

Despite the injury, Moon lasted 53 minutes in the Women’s Royal Rumble Match before being eliminated by Bliss.