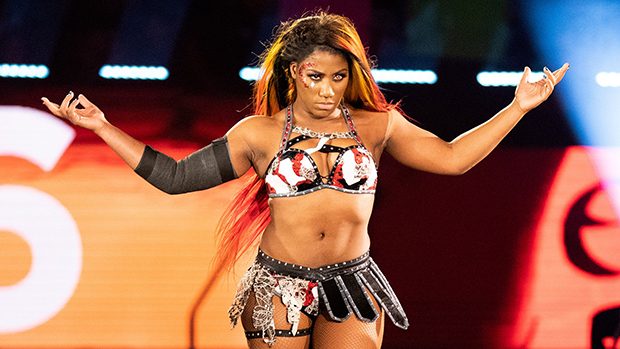 — Despite their upcoming SmackDown Women’s Championship Match against each another at SummerSlam, Bayley and Ember Moon teamed up on SmackDown LIVE to take on Alexa Bliss and Nikki Cross.

Bliss and Cross attempted to use their familiarity with one another to their advantage, preying on “The Hugger” and “The Shenom”‘s inexperience as a unit, but Bayley and Ember were unphased from the jump. After being steadily beaten down by Bliss and Cross, Bayley finally made a clutch tag to Moon. Ember looked to have the match won when she leveled Cross with the Eclipse, but “The Goddess” was the legal competitor, and she blindsided Ember and finished her off with Twisted Bliss for the 1-2-3.

According to Dave Meltzer on Wrestling Observer Radio, Moon taking the pinfall was due to a political decision.

“They had three Raw vs. SmackDown matches on the show and Owens was beating McIntyre and Kingston was beating Styles, so this was the one where Raw got to win,” Meltzer said.

— From betrayals to stunning pinfalls, these five SummerSlam matches ended in heartbreak for WWE Superstars like John Cena, Sasha Banks and more.

— In this clip from Championship Wrestling From Florida, the late Harley Race discusses what it means to be world champion.