Enzo Amore Explains Why He Caused A Scene At Survivor Series (Video) - PWPIX.net 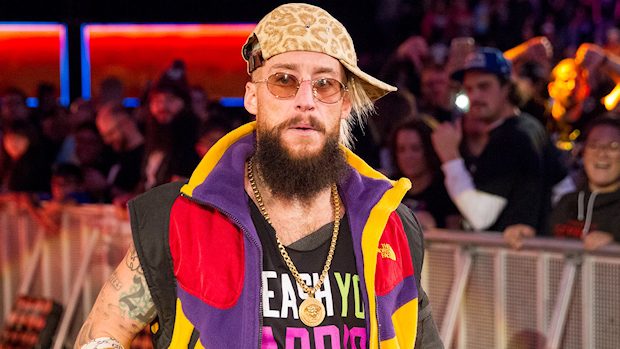 Enzo Amore was trying to earn the respect of Vince McMahon when he caused a scene at Survivor Series last month in Los Angeles, California.

Amore infamously interrupted the pay-per-view event, reciting his pre-match spiel from ringside in the middle of a match between The Bar and AOP. Amore got escorted out of the STAPLES Center by security and banned from the venue as a result of his actions.

While performing stand-up comedy on Wednesday at West Side Comedy Club in New York City, the former WWE Superstar explained why he caused a disturbance at Survivor Series.

“It had nothing to do with my music. I’ll tell you why I did it — I knew for a fact, Vince McMahon would be heated more than anything in the world — but he’d respect the fuck out of it. That’s why I did it,” Amore said.

“Because it was about one person, and that was it. Because I proved to him that I could beat him at his own game of statistics and numbers, and this that and the other, and I don’t even work for your company. I broke no laws, I bought a ticket.”

Amore revealed that he paid $2,500 for the ringside seat. He then explained how he was able to get away from security.

“I looked at her and I go, ‘Lisa, I’m a good person. And you know it.’ It was the most intimate moment I’ve had with a woman in years,” Amore said.

“She goes, ‘You gotta go see Vince.’ ‘I don’t work here, Lisa.’ All of a sudden the cops and security are coming. I look at her and go, ‘I deserve better.’ She slowly let go of my shirt. As the cops are closing in — and this woman wants to take me to see Vince McMahon — I go, ‘I’m out.’ Barged out the side door, had an Uber waiting out there, took a picture with two fans, hopped in the Uber. How you doin’?”

You can watch Amore explain his actions in the below videos.