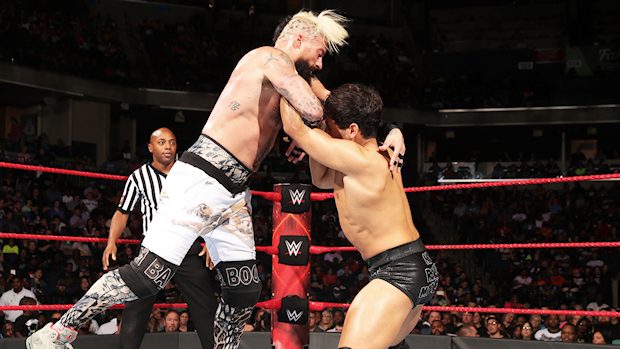 This past week on Raw, Enzo Amore made his official Cruiserweight division debut, taking on Noam Dar.

Amore nearly got himself disqualified for excessive aggression, but he rallied back nonetheless, dispatching Dar outright to bring his Cruiserweight record to 1-0.

Following the match, Amore was ridiculed by WWE officials backstage for blowing several simple spots in his match, including his own finisher.

“I mean you give the guy a simple finish,” Dave Meltzer said on the post-Raw edition of Wrestling Observer Radio. “I mean I don’t know — whatever.”

But of course, sometimes it doesn’t take amazing wrestling ability to get over with the fans.

Meltzer continued, “Here’s the deal, it’s not gonna work out from a match quality standpoint cause Enzo’s not very good. However, he does come across as more of a star than anyone else there and there’s gonna be more interest in 205 Live cause he’s there.”

Meltzer also said Enzo will be the most over guy on 205 Live.

“[Enzo] didn’t have good matches before and stayed over,” he said.