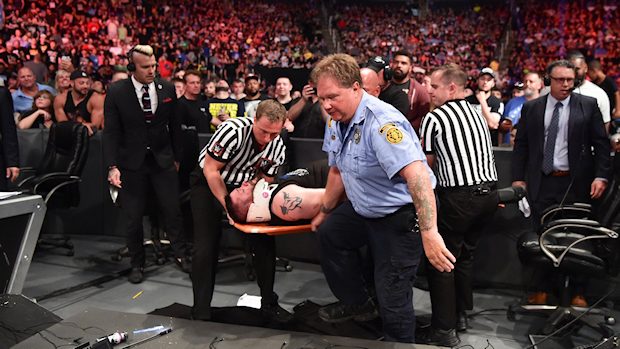 After a 20-foot descent through an announce table during his Steel Cage Match against Braun Strowman at WWE Extreme Rules, Kevin Owens sustained multiple injuries, according to WWE.com. His injuries include bruising of the shoulder and back, bruised ribs and a neck strain. He will be re-evaluated later in the week.

The injuries occurred during the final moments of the match, when Strowman hurled Owens from atop the cage, sending him through an announce table at ringside, technically winning the match by leaving the structure first. Owens was then rushed to a local medical facility for evaluation.

Backstage, Strowman had a sarcastic message for Owens after mercilessly tossing him from atop the Steel Cage.

Tonight on Raw, Renee Young asked Strowman during a backstage interview if he has any regrets for what he did to Owens. Braun said he regrets not having the opportunity to congratulate Owens on his win last night.

Here are some videos from fans who attended Extreme Rules of Owens’ 20-foot fall from the Steel Cage.

Uh this is nuts. Having a blast at my first #wwe match! #extremerules #getthesehands

This angle of Kevin Owens being thrown off the cage by Braun Strowman at #ExtremeRules looks like actual murder. pic.twitter.com/ZzTfvFTGf3