Follow Batista On His Trip From Canada To SmackDown 1000 (Video), Rey Mysterio To Appear On "Miz TV" - PWPIX.net

Follow Batista On His Trip From Canada To SmackDown 1000 (Video), Rey Mysterio To Appear On “Miz TV” 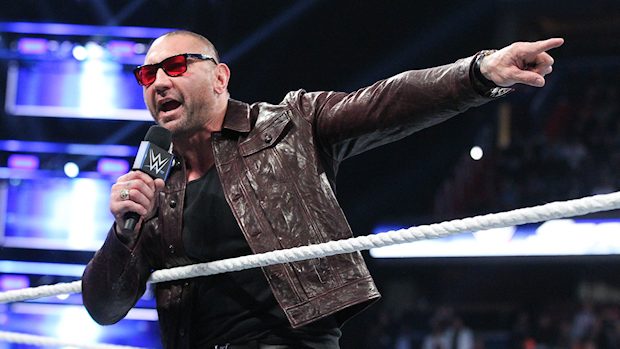 – Join Batista on a trip from the Toronto set of his upcoming movie “My Spy,” to Washington, D.C., where he reunited Evolution during SmackDown’s historic 1000th episode.

– Rey Mysterio made his return to WWE in grand fashion at SmackDown 1000, defeating Shinsuke Nakamura to earn a spot in the WWE World Cup at WWE Crown Jewel. This Tuesday on SmackDown LIVE, “The Master of the 619” will come face-to-face with one of his fellow competitors when he appears on “Miz TV.”

I have BREAKING NEWS from @f1. This Tuesday on #SDLive my guest on #MIZTV will be… @619iamlucha and it’s going to be #AWESOME!

– In this clip from Raw on October 20, 2003, a World Heavyweight Championship Match pitting Goldberg against Shawn Michaels ends with a surprise return from Batista.