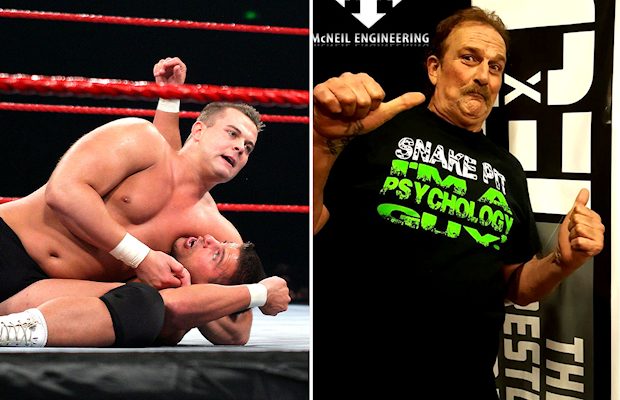 Davey Boy Smith Jr. (aka David Hart Smith in WWE) is “wanted for battery” by cops after an incident with Jake “The Snake” Roberts.

The 32-year-old, real name Harry Smith, is alleged to have thrown coffee in the face of Roberts at a WrestleCon event in New Orleans, Louisiana the day before WrestleMania 34.

The New Orleans Police Department told Ryan Satin of Pro Wrestling Sheet: “The NOPD is investigating a simple battery incident that occurred on April 7, 2018 in the 500 block of Canal Street. The victim told police that at about 11 a.m., he was signing autographs at the location when he was approached by a known subject, later identified as Harry Smith (DOB: 08-02-1985).

“The victim told police he attempted to shake hands with Smith, at which time a verbal argument ensued. Smith then allegedly threw a cup of coffee at the victim’s face and fled the scene. No major injuries were reported by the victim.”

Cops also asked for anyone with additional information on the now New Japan Pro Wrestling star to contact the NOPD Eighth District detectives.

He said that Roberts refused to apologize for comments he had made about Smith’s late father, the British Bulldog.

His son says he offered Roberts the chance to step outside to settle their differences in a fight after he refused to say sorry for previous remarks.

Roberts then allegedly told him to “f–k off,” and Smith Jr. reacted by throwing the coffee at him.

A six-month jail term and/or $1,000 fine is the penalty for a simple battery offense in Louisiana.