Former WWE Women’s Champion On Getting Yelled At By Lita, Injuries Ending Her WWE Career, Retirement 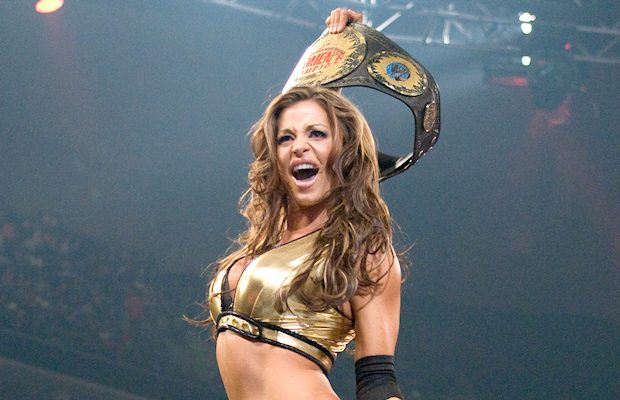 Ahead of her retirement match against Lisa Marie Varon (aka Victoria) at tonight’s House of Hardcore event in Waukesha, Wisconsin, one-time WWE Women’s Champion Candice Michelle spoke to OnMilwaukee.com about coming back for one last match, her time in WWE, injuries ending her career, life after wrestling and more.

Here are some highlights from the interview.

When she first started with WWE, getting called out by Lita in the locker room:

“It was brutal. I remember I was in the locker room with Lita, who is very intimidating. I went to put my makeup on; I thought I took the worst spot in the locker room. I thought I was being respectful. I sat on the floor by a mirror. And she got up in my face, and she was like, ‘What? Do you think you can walk in here and take the best spot in the locker room?’ And I was like, ‘I’m sitting on the floor!’ I was considered the Hollywood girl. These wrestling girls, they paved the way of going to these indie shows and training camps and putting their bodies through this for so long. And I just come from Hollywood and show up. So I get their side of it. I had to earn the wrestling respect side of it.”

How injuries ended her WWE career:

“We were coming back from a two-week European tour, and it was our last match in Nebraska before we got a break. It was a big match with me and Beth Phoenix, and I went up to the top rope for a spot where she was gonna hit the rope and I was gonna eat it. But my boot caught, and I nose dived. So I was knocked out, on live TV. The next thing I remember is waking up in the ambulance, and they said, ‘Your husband’s being flown in.’ When you’re in a neck brace, and you’re in an ambulance, and they’re flying your husband in, it’s pretty scary. Thankfully, I just had a broken collar bone and a concussion. But the hardest part is it shelved me. I worked so hard to get that spot, and that recognition from my coworkers, and from the fans. And now I’m shelved for six months.

I think most wrestlers have a very relentless mentality. Somehow, I had to convince [Producer] Johnny Laurinaitis and the doctors there that my collarbone was not broken anymore, even though the X-rays show it was still. Somehow, I weaseled my way into a match, and the first drop kick, I shattered it. But, I finished the match. I was shelved another six months. Then I was coming back, and WrestleMania was coming up, just being in overdrive. I did a Superman punch, landed on my ankle and tore two ligaments. That was the final injury where I got the call to say, ‘All right, kid. You’re done.'”

Training for her retirement match:

“I did training at Knox Pro Wrestling Academy, back in L.A. That first bump, woo! That s— hurts. You forget. And my body forgot. I trained for a month and a half there a couple times a week. I cried every time I was there. Whether it was because I was in pain or because I missed it, or because of facing those spirits.”

Regarding tonight’s match, Candice posted the following this morning.

The day had arrived! Waking up with so many emotions already! I cannot wait to give it my all tonight one last time! I couldn’t be more honored to fight @reallisamarie I’m so nervous I’m sick to my stomach this am! So excited and grateful too! I pray for guidance and am grateful for everyone that has ever supported me! This one is for you tonight! #onelasttime @houseofhardcore @twitch @thetommydreamer