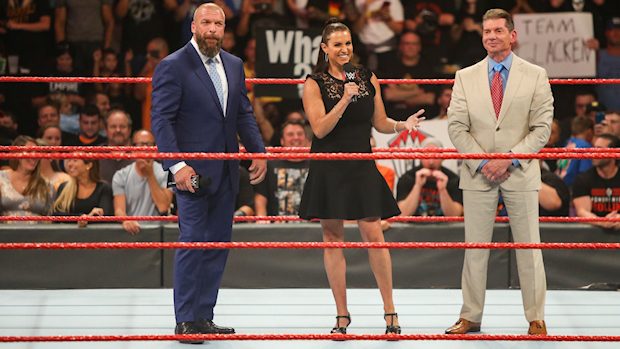 – With almost the entire roster assembled atop the ramp, including the Cruiserweights and SmackDown LIVE Superstars — and with an intro from Vince McMahon himself — Stephanie McMahon and Triple H took to the ring at the opening of Raw and to announce WWE’s first-ever all-women’s pay-per-view, WWE Evolution.

When the segment wrapped up, cameras cut back to the Raw announce team of Jonathan Coachman, Michael Cole, and Corey Graves. In the background, however, Stephanie, Triple H, and Vince could all be seen making their way out of the ring.

Stephanie exited the ring first as Triple H held the bottom rope open for her. “The Game” continued to hold the rope open and jokingly signaled for Vince to go next. Vince grinned and pretended to kick Triple H. He then exited the ring soon after Triple H did.

Check out the video here.

Help celebrate @FinnBalor today by wishing him a happy birthday!

Happy birthday to @FinnBalor AND #DemonFinnBalor…

– After earning a SmackDown Women’s Championship Match at SummerSlam with a huge tap-out victory over Carmella, Becky Lynch finds motivation in her NXT Championship roots. Becky explained her motivation during this backstage interview with Dasha Fuentes last night at SmackDown LIVE.