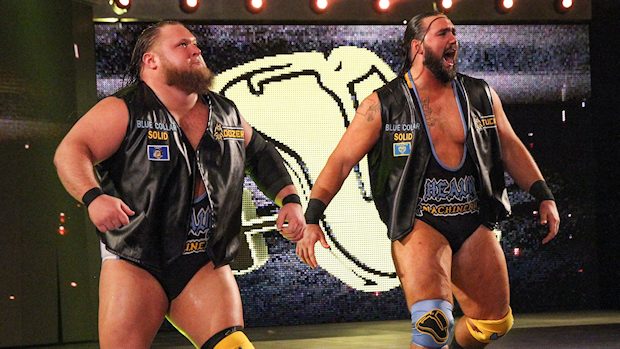 — WWE made a move to lighten Heavy Machinery this week in the form of shortening their names.

Otis Dozovic and Tucker Knight are now officially known as Otis and Tucker, per their WWE.com profiles.

Like Otis and Tucker, Big E had a last name too before WWE shortened his moniker from Big E Langston to Big E in February 2014. He welcomed them to “the club.”

— Next week on SmackDown LIVE, Shane McMahon and The Miz will host The Usos on “McMiz TV.”

Jimmy and Jey Uso have a warning for the SmackDown Tag Team Champions ahead of their appearance on “McMiz TV” next week.

The Usos will challenge McMahon and Miz for the SmackDown Tag Team Championship five days later at Elimination Chamber.

— After their Triple Threat Match win over The IIconics and the team of Naomi and Carmella tonight on SmackDown LIVE, Mandy Rose and Sonya Deville say that their friendship will lead them to victory in the Elimination Chamber Match to crown WWE Women’s Tag Team Champions.