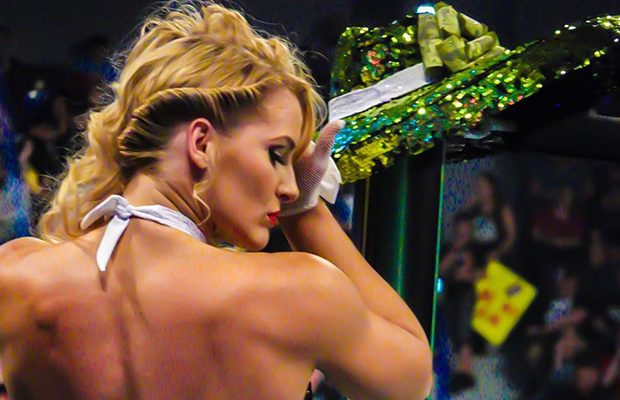 Calling herself “The Lady of WWE,” Lacey Evans mixes the glamour of a pin-up model with the discipline of a warrior.

In the days following the leak, explicit material ranging from topless bathroom selfies to X-rated videos featuring other current or former WWE Superstars began to surface online. The victims included Kaitlyn, Maria Kanellis, Melina Perez, Summer Rae, and Victoria. Summer Rae was under contract to WWE at the time of the leak as she got released the following October. Kanellis was not, but returned to WWE in June 2017.

A few days earlier, private photos of actresses Emma Watson and Amanda Seyfried began circulating on the dark corners of the internet. The leak — dubbed “The Fappening 2.0” in reference to a similar celebrity hacking scandal from 2014 — has targeted many other famous names.

“There have been claims that others will follow,” Dave Meltzer wrote in the Wrestling Observer Newsletter.

This naturally has fans wondering if Evans, who was on the NXT roster at the time, is one of the leak victims. While it seems possible that nude photos of the WWE Superstar could leak online since she’s not too shy about showing some skin, it hasn’t happened … yet.