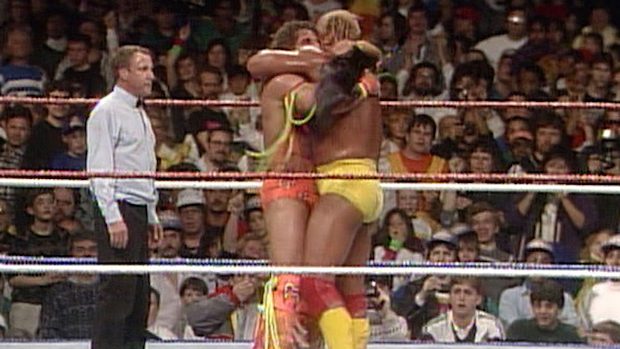 In a series of posts on Twitter, Hulk Hogan reminisced about his final encounters with Ultimate Warrior four years ago this month in what turned out to be the wrestling legend’s last days.

A week after Warrior’s shocking death, the WWE Network aired a documentary on his WWE career and final days. During the documentary, Warrior and Hogan were shown making amends backstage at WrestleMania 30 following a decade-long feud.

Triple H revealed during the documentary that he asked Hogan not to confront Warrior so that Warrior would be able to enjoy the weekend. Hogan, however, had undertaken a new mentality and wanted to apologize to Warrior and settle their issues.

Hogan said he took a joy ride on a golf cart with his son Nick at the Mercedes-Benz Superdome and finding Warrior.

“I went right up to him, I shook his hand and said, ‘Brother, I know I’m not supposed to talk to you, but I just want to let you know I love you,’” Hogan said in an August 2014 interview.

“‘And if you ever want to be friends I’d love to be friends with you. If we could ever do business that would be great. But I just want to tell you that I love you so much. And whatever I did … please forgive me.’

“And then I noticed that there was a WWE camera that peeled around the side. I had no idea that they had a camera following him.

Warrior said he accepted Hogan’s apology and they shook hands.

Hogan recalled their encounter in a tweet on Saturday and felt that he really forgave him.

Warrior spoke with a God presence when we talked we said we forgave each other we said we loved each other,I choose to believe his words,next day at Raw we laughed with Patterson and had a blast! Any negative,jaded,evil opinions that his words were not true I refuse to believe HH pic.twitter.com/eUON0YUwd8

brother it was someone very close to him but it doesn’t matter,l believe him when he spoke and looked me directly in the eyes then we had a blast at Raw the next day. HH

As they shook hands, Warrior said that he thought his apology was genuine. Triple H is then shown talking about Warrior sending him a very long text message about people saying sorry to him during that final weekend and feeling he received closure.

It should be noted that a few months after Warrior’s passing, his widow, Dana Warrior, accused Hogan of being a fake when speaking publicly about her late husband in the aforementioned interview. She suggested that Hogan would not have had made amends with Warrior had cameras not been there.

“Someone sent me what Mr Bollea had to say in video interview with Grantland and I would just like to ask him to stop, Dana Warrior said in a statement on Facebook in August 2014.

“He is the only person in the WWE Universe who did not give a call or send a card. My girls asked why he didn’t check on us like everyone else and I explained simply there isn’t a camera at our mailbox or in the house when we receive our calls.

“I would ask respectfully Mr Bollea, for you to understand my girls hurt and just let some time pass before you say anything more.”

Related ItemsDana Warrior NewsHulk Hogan NewsUltimate Warrior News
← Previous Story Bray Wyatt Tweets Matt Hardy About Report That He’ll Turn On Him
Next Story → Paul Ellering On No Longer Being With The Authors of Pain, Becky Lynch and Dolph Ziggler At UFC Event