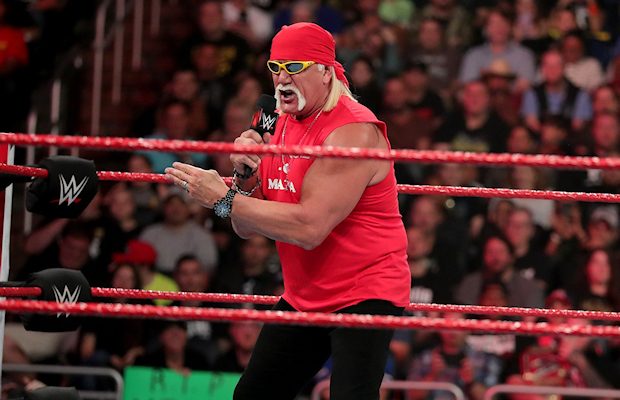 Of the many wrestlers who crossed paths with the late “Mean” Gene Okerlund, few (if any) became more synonymous with the WWE Hall of Famer than Hulk Hogan, whose famous opening line — “Well let me TELL YOU something, MEAN GENE” — took on a life of its own. In his first appearance on Raw in four years, Hogan paid tribute to the man he called the best partner he ever had.

Accompanied by a 10-bell salute, Hogan’s tribute was a subdued remembrance almost completely free of Hulkamania, as he removed his customary shades to honor Okerlund’s commitment to entertaining, cued up a highlight reel of “Mean” Gene’s greatest moments and offered a quiet “I love you, ‘Mean’ Gene; I miss you.”

As a final tribute, Hogan gathered himself, slipped the shades back on and gave one last interview for the legendary announcer. That’s when Hulk began shouting out other fallen WWE Superstars — saying Gene is no doubt in heaven orchestrating a tag match with “Macho Man” Randy Savage and Ultimate Warrior taking on “Rowdy” Roddy Piper and Mr. Perfect … with Andre the Giant as the guest referee.

Curtis Axel got choked up by Hogan mentioning his late father, Mr. Perfect, and took to Twitter to thank “The Hulkster.”

Here is Hogan’s tribute to Okerlund.

Okerlund passed away on January 2 at the age of 76. Okerlund’s son Todd told TMZ that his father suffered multiple broken ribs during a fall in December. Okerlund was admitted to a nursing home four days before his death. Okerlund had trouble breathing and was rushed to a hospital before passing away with his wife, Jeanne, by his side.

WWE’s decision to include Hogan as part of their Okerlund tribute wasn’t without controversy (a look at fan comments on any of WWE’s social media posts on Hogan will clearly show this). In July 2015, WWE excommunicated Hogan and terminated his contract after a tape surfaced of him making racist remarks about his daughter’s then-boyfriend.

In recent months, WWE has slowly brought Hogan back into the fold. WWE reinstated Hogan into the WWE Hall of Fame in July, and he kicked off WWE Crown Jewel in November, WWE’s second event as part of their partnership with Saudi Arabia.

This was Hogan’s first appearance on Raw since March 23, 2015, where along with Snoop Dogg, confronted Curtis Axel — who at the time had been “borrowing” Hogan’s Hulkamania gimmick with Axel referring to himself as “AxelMania.”