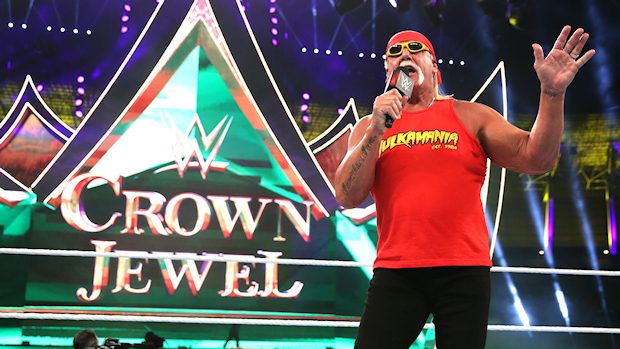 Hulk Hogan is back.

In his first appearance at a WWE show since 2015, “The Hulkster” kicked off WWE Crown Jewel last Friday at King Saud University Stadium in Riyadh, Saudi Arabia.

WATCHA GONNA DO when HULKAMANIA and #WWECrownJewel RUN WILD ON YOU?! pic.twitter.com/nulkYlJ7rk

Hogan tweeted after his appearance:

It’s great to be back with my @WWE Universe family. The love and welcome from the talent and stark raving Hulkamaniacs totally blew me away brother. Only Love HH

On Monday, Hogan sent out a humblebrag tweet saying that he needs to lose some weight following his appearance at Crown Jewel because he doesn’t want to look like he can beat up the entire WWE roster anymore.

Ok, today is a new day. After seeing myself on Crown Jewel I have decided to get serious and get under 300lbs. I looked huge, swole, jacked and my arms are still bigger than most wrestlers legs. I don’t want to look like I can beat up the whole @WWE roster anymore. Only Love HH

Rusev responded to Hogan’s tweet by apparently challenging “The Hulkster” to a match at WrestleMania 35.

I think you should start with me!!! WM35 falls on #RusevDay https://t.co/8rgET5Umin

Hogan responded to Rusev’s challenge by saying that only will he beat him, he’ll also have a new manager in Lana.

.@RusevBUL You are no different than all the other giants that have tried but at least after I defeat you I will have a new manager brother Crushamania. HH https://t.co/erFVTEGPl4

This morning, Rusev responded to a fan who said he should go after the world title instead of wasting time with Hogan.

Rusev said in an interview during SummerSlam weekend that wrestling Hogan is his dream match.

“Hogan,” Rusev said without hesitation when asked who his dream match would be against.

“He’s back in the Hall of Fame. Yeah, Hogan, man he’s the guy I started watching wrestling because of him and I came to America because of him so I could be a professional wrestler, so definitely Hogan.”

Rusev also noted that Hogan personally shared a few stories with him a few weeks earlier on wrestling Ultimate Warrior and The Rock at WrestleMania.

“I talked to him a couple weeks ago about some different stories about matches with Warrior and WrestleMania with The Rock in Toronto and yeah. He knows so much and he has so much experience with so many stories to tell,” Rusev said.