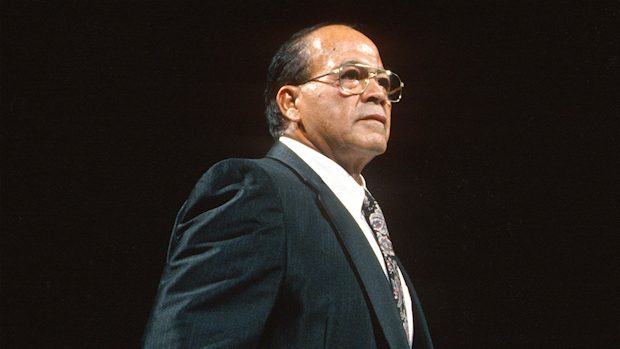 Jose Lothario, one of the biggest stars in the history of Texas wrestling, has passed away.

Former NWA President Bruce Tharpe broke the news of his death via Twitter on Tuesday night.

Sad news today. The great JOSE LOTHARIO has passed away. So thankful that I had the opportunity to induct him into the NWA Hall of Fame while I served as President. He was so happy and it was my pleasure to induct him. God bless you Jose Lothario and may you Rest In Peace.

There’s no word yet on the circumstances behind his passing. He was 83 years old.

Lothario was the most popular babyface wrestler for years in San Antonio and Houston in particular, during the 1970s, when he feuded with numerous top heels of that era and drew his biggest crowds when he teamed with Mil Mascaras against the legendary tag team of Black Gordman and Great Goliath.

He was a regular challenger for world champions like Dory Funk Jr., Harley Race, Jack Brisco, and Terry Funk, and had a long Houston feud with Gino Hernandez. He also trained Shawn Michaels and worked with Michaels in starting a wrestling school in San Antonio and a promotion in 1999, which is where Daniel Bryan and Brian Kendrick got their start.

Lothario also had a run in the World Wrestling Federation in 1996 and 1997, where he was portrayed on television as Michaels’ manager and trainer. Lothario was pushed as Michaels’ trainer for his first WWF World Heavyweight Championship win over Bret Hart at WrestleMania XII. He accompanied HBK for the bout, which was a 60-Minute Iron Man Match.

Lothario wrestled nine matches for the WWF from August to October 1996, all of which involved Jim Cornette. Lothario beat Cornette at several house shows, and at the In Your House 10: Mind Games pay-per-view on September 22, 1996, he squashed Cornette. The following night on Raw, Lothario and Michaels lost to Cornette and Vader in a tag team match.

Lothario continued to manage Michaels until Royal Rumble in January 1997. He briefly returned to WWF in January 1999 as part of a storyline involving Michaels. The two later had a legitimate falling out.

Born Guadalupe Robledo, he started his career in Mexico as both a boxer and a wrestler in the early 1950s and held the regional Occidente Heavyweight Championship in 1954. He was a notable star in Mexico when he first came to West Texas in 1957, and he held countless championships, mostly in Texas, Florida, and California where he headlined for years.

His boxing background was used in wrestling all the time for his comebacks, as his specialty in feuds were both taped fist matches and Mexican deathmatches. He frequently held the NWA Brass Knuckles Championship in the 1970s. Dusty Rhodes, who started in Texas when Lothario was a headliner, once labeled him as the best working babyface in wrestling.

Michaels was introduced to Lothario out of high school. Lothario trained him and got his career started as a preliminary wrestler for Mid-South Wrestling.

Lothario wrestled regularly in Texas through 1985, but in the latter years was more of an undercard legend. He regularly held championships in the United States from 1959 to 1982.

WWE issued the following statement on his passing:

WWE is saddened to learn that Jose Lothario has reportedly passed away at age 83.

Despite never winning a WWE-sanctioned championship or competing at WrestleMania, Jose Lothario – born Guadalupe Robledo on Dec. 12, 1934 – made a lasting mark on the WWE Universe by simply agreeing to train a cocky teenager from San Antonio, Texas. A cocky teenager that grew up to become WWE Hall of Famer Shawn Michaels.

Lothario helped HBK find his footing for a career between the ropes, from selecting Shawn Michaels as a ring name to teaching The Showstopper how to effectively perform the signature kick that came to be known as Sweet Chin Music. HBK soaked up every last lesson taught by Lothario, a Saturday morning staple for wrestling fans of a certain age from the Lone Star State.

“I think every young boy who lived in Texas knew who Jose Lothario was,” Michaels told WWE Magazine in 1996. “I first saw him on TV when I was 12. He was the first Superstar to come across my screen. He is a legend in San Antonio, Cuba, Mexico… just about everywhere!”

Of course, Lothario became an effective mentor only after establishing his well-traveled reputation as a gritty grappler. As an NWA mainstay, he helped usher in popular Mexican wrestling styles to the sports-entertainment scene in the United States. His fans knew him best as “Super Sock,” a nickname recognizing the punches Lothario used to dole out during his past experiences in boxing.

Lothario even briefly displayed his considerable talents before the WWE Universe, most notably by humbling Jim Cornette in a match at In Your House 10: Mind Games.

WWE extends its condolences to Robledo’s family, friends and fans.