Identity Of Fan Who Asked Sasha Banks and Bayley A Question On Raw - PWPIX.net 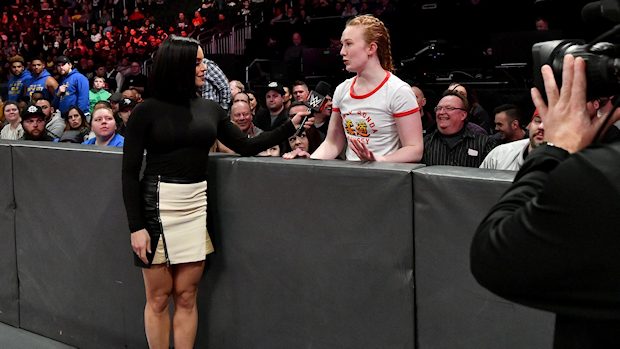 When he isn’t changing the rules of matches in the middle of matches, Baron Corbin is busy making some personnel moves with long-term repercussions. Specifically, he appointed Alexa Bliss to oversee the Raw Women’s division, and “The Goddess” began her tenure with an “Open Forum” with Sasha Banks and Bayley.

The sit-down was an opportunity for The Boss ‘N’ Hug Connection to answer fan questions. Bliss pointed out a fan at ringside wearing a Ronda Rousey T-shirt and with Charly Caruso holding the mic, she asked them what they would change about the Raw Women’s division.

Bayley wants the Women’s division to continue to grow and Banks want to send Alexa’s “little butt” back to SmackDown LIVE. Alexa then tried to stir the pot between the two friends by saying Bayley has brought Banks down. This leads to Bayley saying she would send Bliss “back to hell where you came from.”

Immediately after Bayley said that. Dana Brooke inexplicably turned heel by attacking The Boss ‘N’ Hug Connection from behind with Mickie James and Alicia Fox, though Sasha and Bayley were able to fight their way out of the ambush.

In a backstage note from Raw, the fan’s question to The Boss ‘N’ Hug Connection was staged since she was a plant (the industry term for a trained wrestler or actor who poses as a fan at an event).

“The woman who asked the question about what Bayley and Sasha Banks would do to change the women’s division was a plant who was brought to ringside right before the segment took place,” Mike Johnson noted on PWInsider.com.

The fan is actually an independent wrestler from Minnesota who works under the name Kara Noia. She is the first female graduate of The Academy: School of Pro Wrestling, a wrestling school owned and operated by former WWE/TNA wrestler Ken Anderson (aka Mr. Kennedy in WWE). Noia began training in June 2017.

Surprise! I bought a front row ticket to watch RAW in Milwaukee and got picked to ask Sasha and Bayley a question! Just kidding, I got invited to be an extra on Monday Night RAW!!! What an amazing night 😊 #Timstagram day 235

None are true, but all are funny

Here are some photos of Noia in the ring.

The “day after leg day” feeling, who else can relate? 📸: @rtwilbur #Timstagram day 188

Happy Halloween! I hope you all had/are having a great night. Last weekend I was Stone Cold Kara Noia, did anybody else have a wrestler costume today? #Timstagram day 210 📸: @3countphoto

When your relative says “Do you really need another slice of pie?” #Timstagram day 232

As for Bliss, she has been out of action since suffering a concussion on October 20 during a tag team match against Raw Women’s Champion Ronda Rousey and Jax at a live event in Hartford, Connecticut. Her injury came one night after she returned to the ring after being out of action for a month.

With her status in limbo, WWE began focusing on how to keep Bliss on television in a non-wrestling capacity. Meltzer also mentioned that there has been talk of making Bliss the General Manager of Raw in case Corbin is removed.