Is Nikki Cross Now On The WWE Main Roster After Appearing On SmackDown LIVE? - PWPIX.net

Is Nikki Cross Now On The WWE Main Roster After Appearing On SmackDown LIVE? 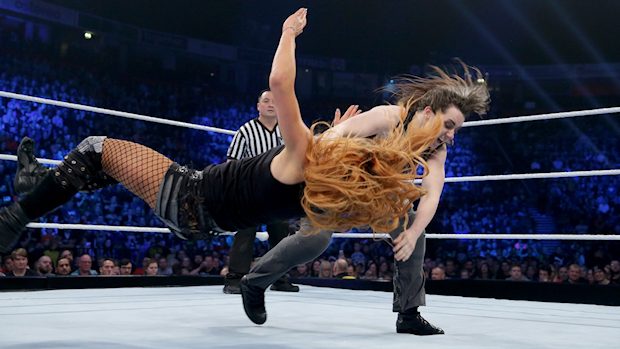 Nikki Cross made her SmackDown LIVE TV debut on Tuesday night in Manchester, England as she answered a challenge from SmackDown Women’s Champion Becky Lynch.

After Raw Women’s Champion Ronda Rousey delivered a fiery message to Becky Lynch on Raw, the SmackDown Women’s Champion retorted by very bluntly telling her that even though she “wasn’t meant to be in the main event or the talk of the industry” like Rousey was, here she stands. Lynch then doubled down on her promise to take Ronda’s arm at Survivor Series and issued an open challenge.

Suddenly, SAnitY’s theme music began to blare through the arena, and Eric Young, Alexander Wolfe and Killian Dain hit the scene … only to introduce Cross. Cross charged to the ring in a hyperactive and deranged manner, taking the microphone and eerily expressing her desire to “play” with Becky. Becky made it clear that she wasn’t here to play, but to fight. Regardless, the match was next.

Cross brought the intensity early and often against Lynch, going at “The Irish Lass Kicker” full force. “The Man” slowed Cross with a Bexploder, but Cross kept going at it with the champ. However, the crazed Cross came up just short, despite unleashing an unorthodox attack as Lynch caught her in the Dis-arm-her for the tapout victory.

An NXT wrestler making his or her debut on SmackDown LIVE usually means they’re now an official member of the blue brand. However, it doesn’t look like this is the case with Cross.

WWE.com still has Cross listed as a member of the NXT roster (although they can be slow to update the roster page). The front page of WWE.com is also wording her debut as “NXT’s Nikki Cross,” which seems to confirm that she’s still a member of NXT. Finally, WWE.com’s recap of her appearance labels her as SAnitY’s “former running mate.”

We should know soon whether this was an official call-up or not, but it looks like it was a one-off for television purposes.

Yellow or blue, smackdown or NXT, by my side, by your side, behind the scenes, in the spotlight or in the shadows-my messed up little family always #Sanity #UnitedwePurge “there’s no need for rules…chaos has won” pic.twitter.com/U4Zm3ezVvW