Jeff Jarrett Wasn’t WWE’s First Choice For The No. 2 Entrant In The Men’s Royal Rumble Match 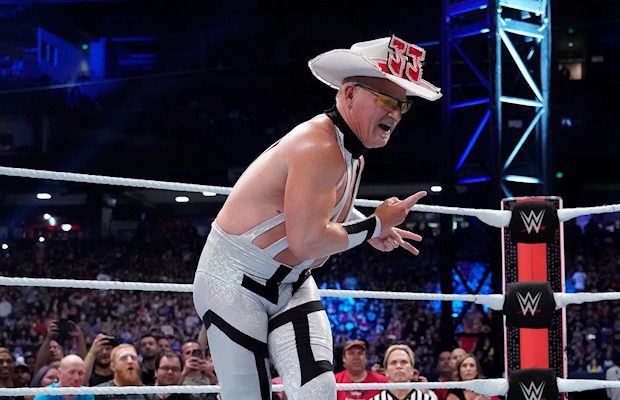 The Women’s Royal Rumble Match was short on surprise entrants this year, but the men’s version kicked things off with a WWE Hall of Famer.

The Men’s Royal Rumble Match opened with Elias holding his guitar and teasing another concert. But before he could get started, Jeff Jarrett’s music hit, and the former Intercontinental Champion came down wearing his old gear, complete with flashing lights on his hat.

Elias offered to perform a duet to kick off the match, then asked Jarrett to repeat his catchphrase by spelling his name. Jarrett obliged, but Elias blindsided him from behind. The Men’s Royal Rumble Match officially started, and Elias blasted “Double J” with a guitar and tossed him out of the ring to score the first elimination.

According to Rajah.com, the role of engaging Elias as the No. 2 entrant was originally planned for another guitar weilding former WWE Superstar: The Honky Tonk Man.

WWE reached out to the former Intercontinental Champion, but an agreement couldn’t be reached for him to appear. WWE also wanted him in part because he resides in Phoenix, where the Royal Rumble took place.

Jerry Lawler, who did color commentary for the match at ringside, confirmed WWE’s interest in The Honky Tonk Man for the Rumble on his latest podcast. Lawler asked him for his contact information since they’re cousins.

Jarrett appeared on Raw the following night flanked by Road Dogg, who resurfaced for an impromptu duet of “With My Baby Tonight” to make up for the concert Elias would not give the WWE Universe. Elias was once again unimpressed, and he shattered guitars over the back of Road Dogg and after a brief brawl, Jarrett as well.

You can expect to see Jarrett more frequently on television as he signed a contract with WWE.

1Wrestling.com reported earlier in the day that Jarrett is joining WWE for a behind-the-scenes role as a producer. PWInsider.com independently confirmed that and added that Jarrett will be appearing as a television performer as well. There’s no word yet on whether Jarrett is coming back to wrestle, feud with Elias, and/or have a regular TV role.