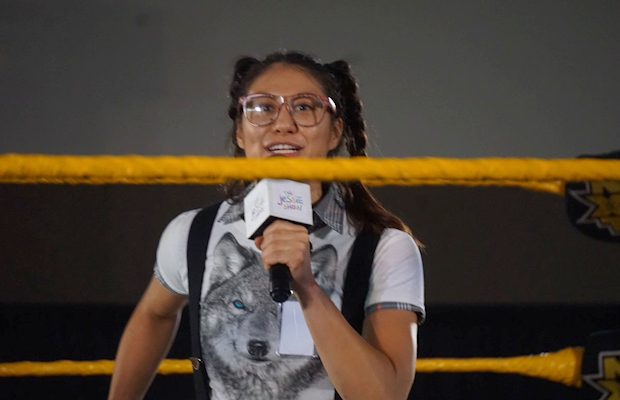 First impressions are everything so WWE will often gauge fan response to an NXT Superstar’s gimmick at non-televised shows before featuring him or her to television. This is the case with Jessie Elaban, who portrays a child-like character at shows in Florida.

Standing 5-foot-10, the rangy and charismatic Elaban has been pegged as an up-and-comer to watch since making her wrestling debut last October. She finally made her WWE Network in-ring debut last night, taking on fellow NXT Superstar Taynara Conti in the First Round of the Mae Young Classic.

Elaban used her size advantage and raw athleticism to keep the Brazilian grappler guessing. However, she couldn’t match her mean streak. The self-proclaimed “Real Black Belt of NXT” used extreme tactics to inflict pain on Elaban, and at one point even ran the webbing of Jessie’s fingers across the top rope. Elaban rebounded and connected with an axe kick to Conti’s back, but Conti, a decorated judo player, blocked a subsequent suplex attempt. She then spun Jessie into a judo throw/side slam to score the win and advanced to a Second-Round Match against Lacey Lane.

Elaban tweeted the following after her loss:

Elaban switched her focus to wrestling last year after being recruited to train at the WWE Performance Center. Having spent the past year learning under the Performance Center’s world-class coaching staff, she has progressed quite rapidly. Since making her wrestling debut, Elaban has wrestled nearly 50 matches, according to CAGEMATCH.